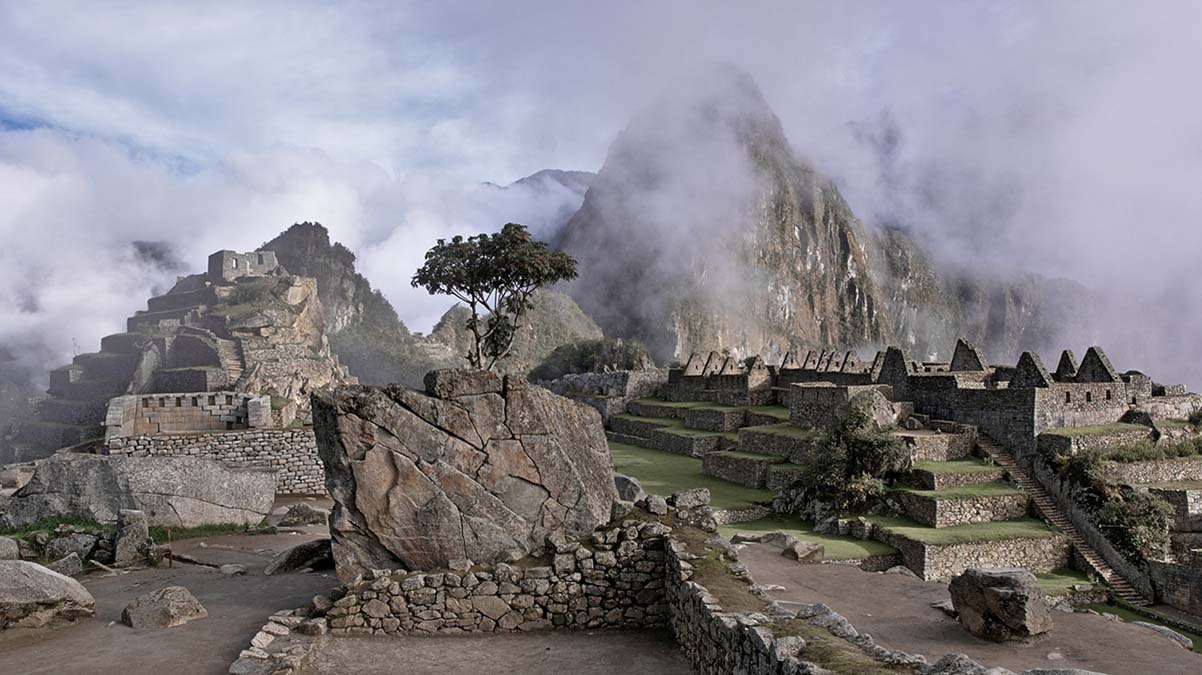 The old saying about the journey being more important than the destination was never more appropriate than when I went on a spiritual tour of Peru. Of course Machu Picchu was the focal point of the program, but there are so many other amazing sacred spaces in Peru where a traveler could have an awesome experience even if they never set foot on the mountain-top citadel that Hiram Bingham called “The Lost City of the Incas.”

There are probably a lot more, but in this post I am just going to tell you about 10 of the most impressive “must-see” sites in Peru besides Machu Picchu. Of course I’m not saying not to go there, but if you invest all the time and expense of traveling to Peru and the only sacred place you visited was Machu Picchu, you would be making an enormous mistake. It would be like ordering a banana split and then throwing away everything except the cherry on top.

Like most group tours to Peru, mine started with a flight from Los Angeles to Lima, and then a shorter flight from Lima to Cusco. The tourist train trip to Aguas Calientes and Machu Picchu originates in Cusco, but so do lots of other excursions. So let’s start with those nearest to Cusco.

Right within the city of Cusco is the Coricancha (also spelled Koricancha, Qoricancha or Qorikancha). Its original name was Intikancha, as it was devoted to Inti, the Inca sun god. When the first Spanish invaders saw it in about 1536, they were dazzled by the enormous amount of gold which was reported as being “fabulous beyond belief.” The walls were covered with sheets of gold, and golden statues were everywhere. 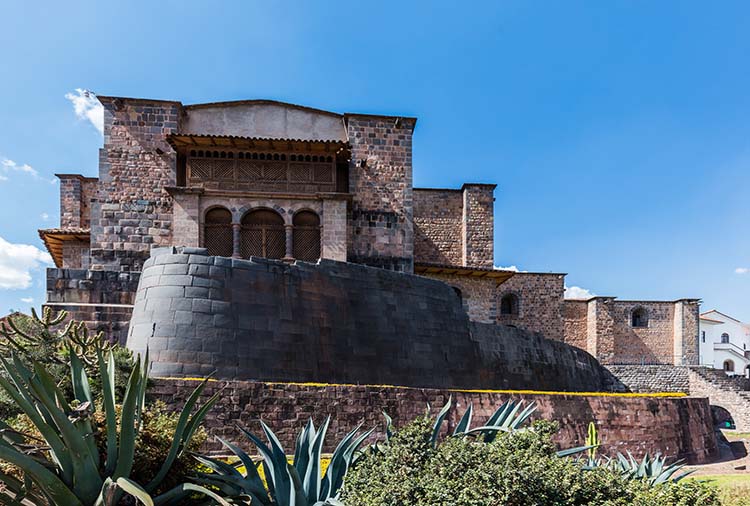 The Spanish built a Christian church on the site, destroying some of the original construction, but what remains is impressive. While the Convent of Santo Domingo has been damaged by earthquakes and then repaired numerous times since it was built in the 16th century, the original Inca stonework remains unscathed. 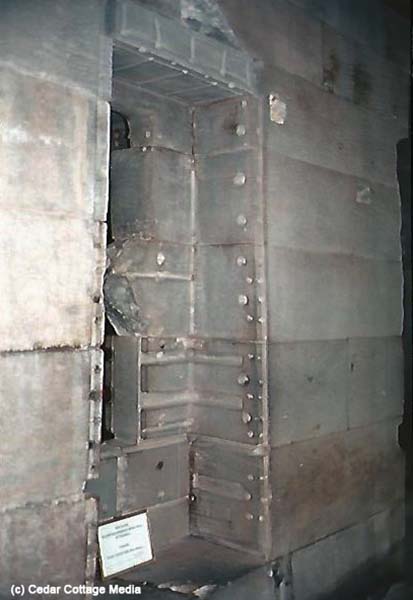 I was impressed by the intricate details of the stonework inside the Coricancha. The picture I took shows what look like channels cut into the stone as if to fit electrical wiring, or some other mechanical devices. Of course, that would have been impossible unless you are someone who believes the ancient Incas might have been helped by Extra-terrestrial advisors.

Only about a 45-minute walk from the center of Cusco is the enormous Sacsayhuaman complex. The name sounds a bit like “sexy woman” but in Quechua it means “satisfied falcon.” We were told this is a reference to scavenging birds that feasted on corpses after a great battle was fought there.

Just about everywhere you look around Sacsayhuaman there is something amazing to see, and my photo below is certainly one of them. This enormous stone was sculpted with indentations hollowed out. 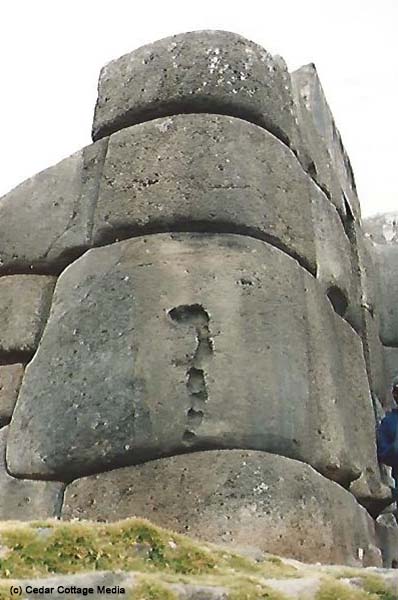 Their size and shape corresponds with the human brain and spinal column. It is believed this carving represents the seven chakras, and the hollows were originally filled with precious gems, crystals or gold. During Inca times, rituals were conducted in Sacsayhuaman for awakening the kundalini, the energy said to originate from the base of the spine. For this reason, another name for Sacsayhuaman was the Serpent Lightning Temple, a metaphor representing that energy.

A few miles northeast of Cusco is the archaeological site of Qenko (also spelled Q’enqo, Kenko, or Quenco). The name is the Quechua for zig-zag, which is a good way to describe the intricate carvings made in one huge monolithic rock. Its chambers and tunnels were used for spiritual ceremonies, rituals and even sacrifices for the benefit of farm crops. 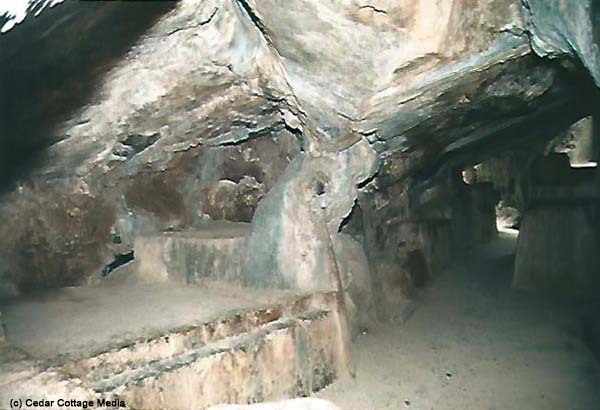 My photo shows the inside of a cave that was associated with forces of the underworld and worship of the dead.

About 35 miles northeast of Cusco, at the South end of Peru’s Sacred Valley of the Urubamba River is the village of Pisac. When I was there about 20 years ago, I thought it was the highlight of my entire sacred journey and the site I would most like to go back to if I should ever return to Peru.

High above the village, at the top of the steep countryside, is a complex that’s like a miniature Machu Picchu. At the very peak is an Intiwatana (hitching post of the sun) and around it are the remains of ceremonial buildings, fountains, baths, and an altar. 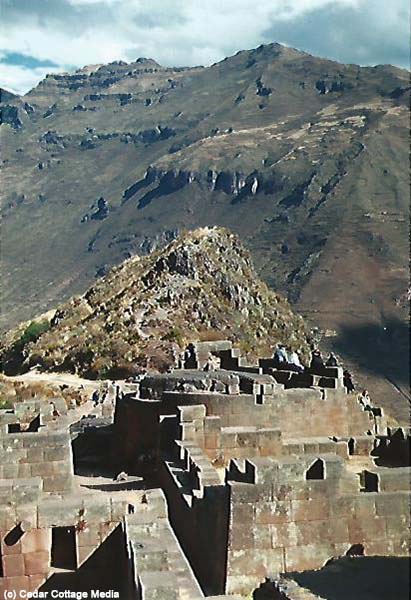 If you go, be sure to do so on a Tuesday, Thursday or Sunday, because that is when a large market is held in the village. Very lively and colourful, the market was one of the best opportunities to buy souvenirs that I found, with vendors and shoppers haggling over the prices of everything from inexpensive trinkets such as clay musical instruments to finely crafted linens, jewellery and clothing. 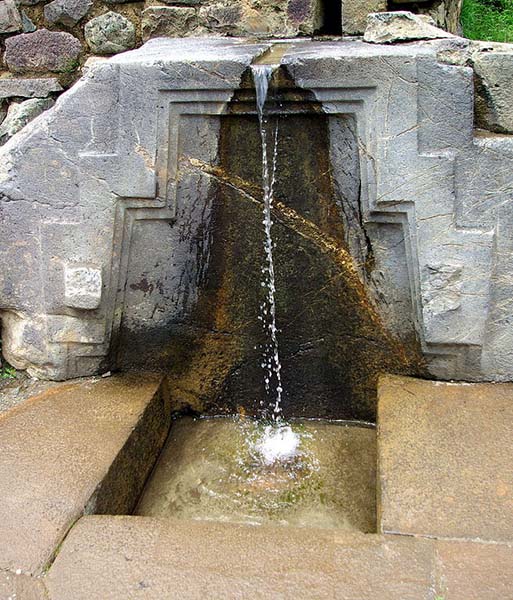 Continue about 35 miles further up the Valle Sagrado to the north and you’ll come to Ollyantaytambo. You should plan to spend at least half a day at this amazing site to touch the water of the sacred fountain, climb up the terraces and view the image of Viracocha in stone on the hillside above the town.

The absolute must-see attraction is the main altar, the Temple of the Sun at the top of the complex with its cyclopian carved pink stone panels. There are six of them, side-by-side. Each is roughly 12-feet (3.5 meters) tall. The carvings are now so worn some are barely visible. But how on earth did the Inca stone masons move them up to the top of the mountain? Each weighs 50 tons, and they came from a quarry 5 kilometers outside of town and on the other side of the Urubamba River. 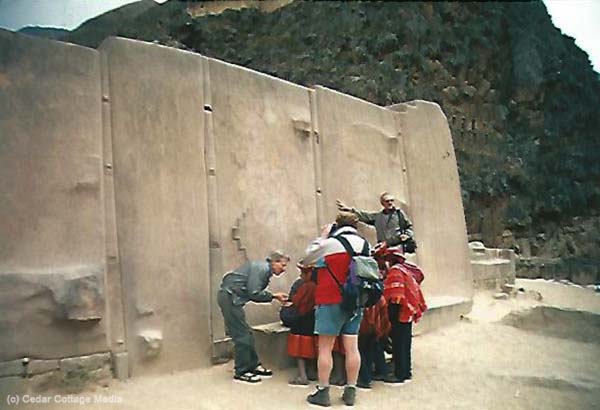 The next four sacred spaces I want to mention are in a different area, down at the southern end of Peru near Lake Titicaca. Our tour bus from Cusco to Puno seemed to take forever, but there are overnight buses that leave Cusco at around 10 pm and arrive in Puno at about 6 am, which is a convenient fit for a lot of Lake Titicaca tours that start at around 7 in the morning.

We took a boat to Taquile Island, where we were impressed to learn about the culture of the Aymara people. Their native language is Quechua, and their high-quality hand-woven fabrics are world famous. In their tradition, it is the men who are the weavers. 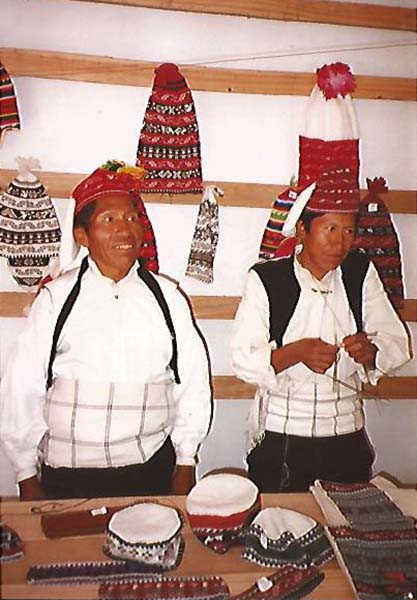 Lake Titicaca is the second largest lake in South America and it is a very important place in Inca history and tradition. According to legend, the golden Sun Disc that was kept at the Koricancha in Cusco until the time of the Spanish invasion originated in Lake Titicaca. An even stranger theory is that this Solar Disc was brought to Lake Titicaca by Lord Aramu Muru from Lemuria after the continent of Mu sunk into the Pacific ocean.

In Lost Cities and Ancient Mysteries of South America David Hatcher Childress wrote about The Monastery of the Brotherhood of the Seven Rays, where the Sun Disc was hidden after it was taken out of the Koricancha for protection. More details about this secret monastery can be found in Secret of the Andes by Brother Philip (whose real name was George Hunt Williamson.)

One of the foremost experts on Peruvian legends, shamanism and native traditions is Jorge Luis Delgado, an indigenous Inca of Aymara heritage. I met him at his hotel in Puno, and he related how he came to discover the very mysterious formation known as Amaru Muru’s portal. I will be writing about Jorge Luis and other Andean shamans in greater detail at another time, but in this report it is noteworthy that he recommended our group see three sacred spaces near Puno and Lake Titicaca:  the Aramu Muru Portal, the House of the Spirits and the chullpas at Sillustani. 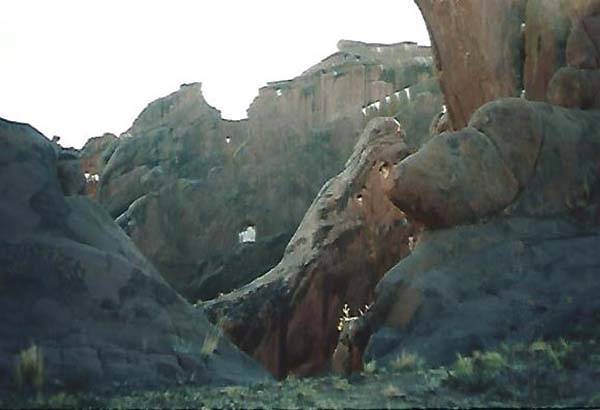 We walked near the entrance to The House of Spirits as we neared to Aramu Muru’s Portal. They are quite close to one another. A foreboding looking valley, the House of Spirits was a place we only peeked into, rather than attempting to enter as it was rather late in the afternoon, the weather was threatening rain, and our main focus was on the Portal. However, you can see from my photo below how the House of Spirits does not look like a very inviting space. Jorge Luis Delgado told me that shamans go there to communicate with the spirits.

Also known as the “Gate of the Gods,” or a trans-dimensional stargate, the Portal of Aramu Muru is a representation of a doorway, cut into the solid rock wall in the shape of a large letter T. No wonder it has become such a popular destination for explorers seeking a pilgrimage to the paranormal. 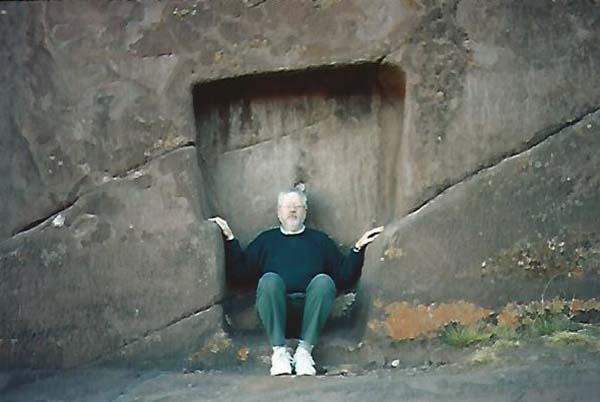 When I sat inside, I felt the briefest flash of an impression of a tunnel, but I did not have a very clear vision. Another member of my group, however, had a very intense experience. She reported losing body consciousness and seeing a bright, bluish light that transformed into a softer pink glow. She felt she was experiencing Total Unconditional Love. She heard a voice telling her the portal was a channel between the 3rd and 4th dimensions. It then gave her guidance about her life’s work and how she was meant to help others connect with and open their hearts. She felt Spirit had used the Portal to affirm the path upon which she was now walking.

The final pilgrimage destination near Lake Titicaca that is particularly noteworthy is Sillustani, the pre-Inca cemetery on the shore of Lake Umayo near Puno with its eerie tower-shaped tombs called chullpas. 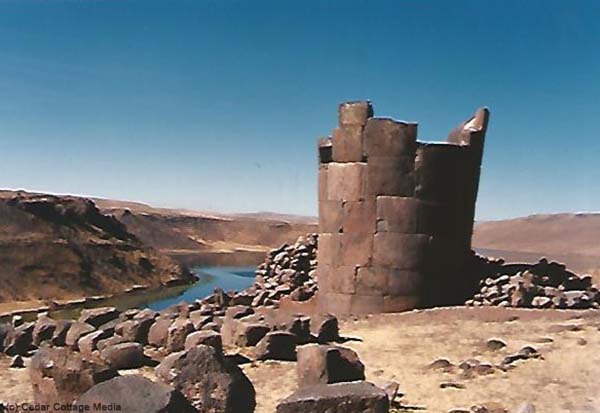 These burial chambers are known as “houses of the soul” and most of them were damaged by grave robbers. Each has only one opening, in the East, where the first light of day from the morning sun can enter. Nearby are small stone circles named for the Sun and Moon, and our group did a ceremonial ritual there, marking the end of our spiritual tour of Peru.

There is, however, a 10th sacred space in Peru that is perhaps the most powerful and mysterious of all – even possibly surpassing Machu Picchu.

Also sometimes spelled Marca Wasi, Marcahuasi is a pre-Inca site located in the Andes near the village of San Pedro de Casta gained notoriety after being made famous by archaeologist Daniel Ruso in his book, Marcahuasi: The Story of a Fantastic Discovery. Ruso describes the site as having more than 20 energy vortexes that are rich with healing energies. I interviewed a paranormal researcher who visited Marcahuasi and had several unexplainable experiences there including sightings of a UFO. 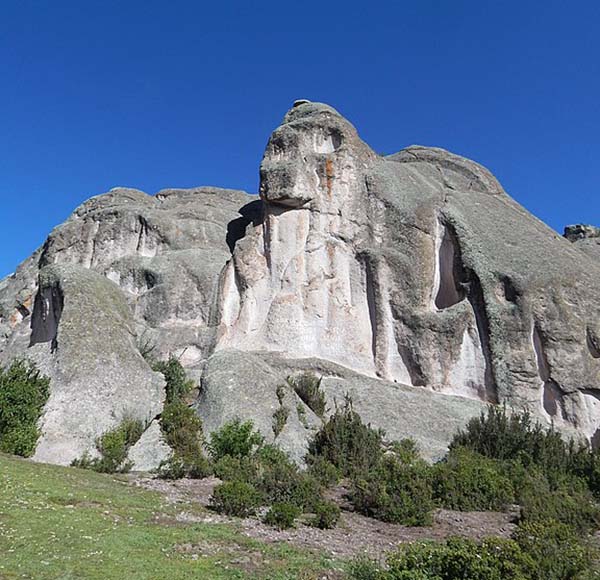 One of the best-known features of Marcahuasi is an ancient stone carving known as The Face of Humanity. In the morning, when illuminated by the light of the rising sun, it looks like the face of a young man, looking upwards. But in the evening, as the light is fading and coming from the opposite direction, it looks like an old man facing downwards.

Marcahuasi is believe to have been an ancient mystery school, and among its stone carvings can be seen “impossible” representations, such as humans of all different races, and dinosaurs that were extinct and supposedly unknown to the pre-Incas of the Andes who are believed to have carved them 10,000 years ago.

All other photos by Robert Scheer (c) Cedar Cottage Media