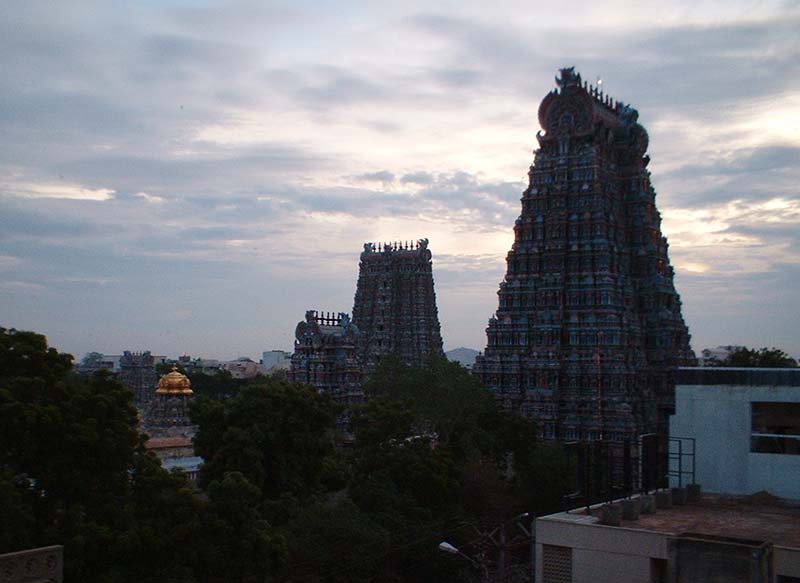 I had to stretch my neck to look up at the enormous tower. Nine stories tall, the gopuram was alive with colourfully painted, sculpted gods, goddesses and animals, soaring above the entrance to one of the largest and most unusual temples in South India. The Meenakshi Sundareswarar temple in Madurai attracts 10,000 visitors on a slow day, 25,000 on Fridays, and even more during a festival. I was there on a Friday evening during the Navaratri festival, and I felt grateful to have met a local who agreed to show me around. 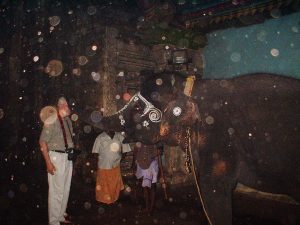 We left our shoes and socks at the gatehouse and walked past stalls selling garlands of fresh flowers — bright orange marigolds and red and yellow flowers that looked like chrysanthemums. The temple was busy, but it wasn’t as crowded as I feared it might be. Covering an area greater than fourteen acres, it can comfortably hold thousands of people, as well as at least one elephant. There was so much activity going on that it took me a moment to realize I was face to face with a live elephant. She had white spirals and floral patterns painted on her head, ears and trunk, and bells around her neck. I held out a 20 rupee note and she whisked it out of my hand. Suddenly her trunk was pressed against my forehead, nearly knocking off my eyeglasses; I had been blessed by a sacred elephant.

Mr. Siva told me that the temple was unusual because its primary deity is not the god Shiva (known locally as Sundareswarar) but the goddess Meenakshi (another name for Shakti). It is commonly called the Meenakshi temple, and the most popular of its three entrances leads directly to the shrine of the goddess.

We walked past a long row of columns that surrounded the Golden Lotus tank, a large rectangular pool of water where worshippers ceremonially bathe before entering the holy shrines. In the middle of the water was a large sculpture of a golden lotus. “This is the only temple tank in India that has no fish in it,” Mr. Shiva said. “According to legend, a heron-like bird once came here to meditate, but the fish in the tank were interfering with his meditation, so he prayed to God, and from then on there have been no more fish.”

Mass prayers are also very unusual in Hindu temples, but each Friday evening in the Meenakshi temple, a group of worshippers prays for patients in a nearby hospital who are facing major surgery. The patients’ names are written on a white board and read aloud during the service. The policy was started one year ago by temple commissioners, because the power of prayer is known to promote healing.

The city of Madurai in Tamil Nadu state is so ancient that its origins are lost in the mists of time, but a manuscript written in 650 A.D. refers to the area having been a center of learning for 9,990 years. According to legend, the temple was built around a lingam (ceremonial phallus) that was discovered in a forest. The earliest written reference to a temple in Madurai dates from the 9th century. Whenever it was first built, Muslim invaders destroyed it in 1310. Construction of the current temple began in 1560.

The lingam symbolizes the power of creation, Mr. Siva told me. He said that lingams are designed to be the focal point of power in a temple — the meeting point of energy from the heavens coming in from above and energy from the earth coming up from below. 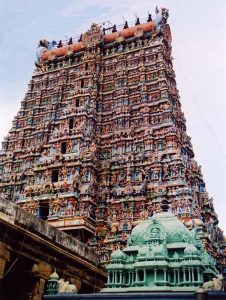 As we walked through the temple’s 1,000 pillar hall, I remembered what I had been told about another Shiva temple I visited in Kanchipuram — that it contained 108 lingam stones. Someone else had told me there are 108 classical Indian dance positions. When I asked Mr. Siva about the significance of the number, he said that the numbers 108 and 1,008 are commonly found in Hindu temples because the value of the digits totals nine, and nine is a sacred number. There are nine holes in the body and nine planets, and the temple’s four main gopurams are nine stories tall. Even the name of the festival being celebrated, Navaratri, is Sanskrit for the number nine. It is a nine-day festival commemorating a nine-day battle between the goddess and a demon.

I was shown a fenced-off area where there were gleaming silver shrines devoted to the nine planets. We saw people walking around them (always in a clockwise direction) and praying. Siva told me it is particularly auspicious to circumambulate the nine planets nine times on a Saturday, because Saturn is the most powerful of the planets.

Near another shrine I noticed an area where you could buy coconuts. Remembering having once been in a Hindu temple in Malaysia where someone was smashing coconuts, I asked Siva what it meant. He told me that coconuts are sacrificed because they have three eyes, just like an enlightened human. Before devotees go into this shrine, they ceremonially leave behind their ego. Breaking the coconut symbolizes destroying one’s Self.

Of course I could not enter, because only Hindus are allowed into the most sacred shrines, but as I watched people going in I wondered whether I would ever become enlightened enough to open my third eye, or strong enough to let go of my ego. Certainly they are goals worth pursuing.

For more information about travel to India visit www.tourismofindia.com.

I visited India on a press trip in 2003 as a guest of the Government of India Ministry of Tourism.