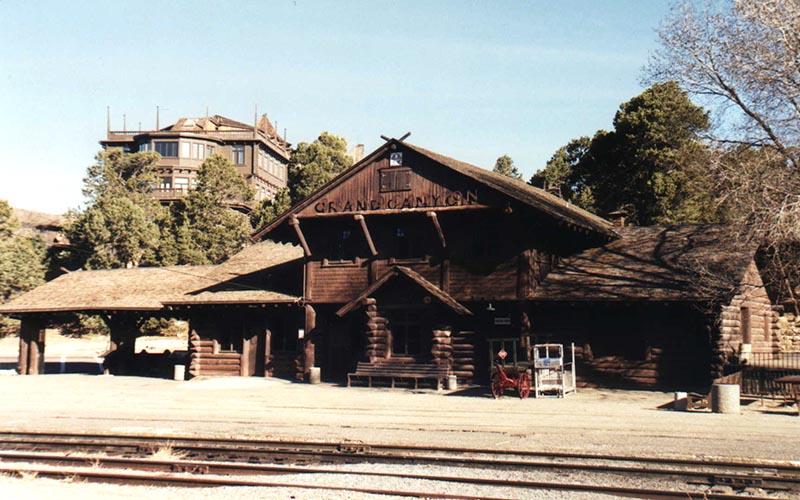 We bounced along a deeply-rutted dirt road from the Indian cave with its 3,000 year old petroglyphs and pictographs. We were heading back to see the Grand Canyon at sunset, keeping an eye out for mountain lions, bobcats, elk and deer. The driver was also keeping an eye out for potholes in the road. He wasn’t avoiding them to make our ride more comfortable, but for the benefit of the local wildlife. It had rained recently, and the water-filled holes in the road would be sources of precious moisture for the countless varieties of mammals and birds that live in the Kaibab National Forest, just south of the Grand Canyon.

One mile from the South Entrance of Grand Canyon National Park is the town of Tusayan (TOO-see-on), a Payute name that means “land without water.” Actually, the upper part of the Sonoran desert gets an average of 40 cm. of rain per year, with almost all of it falling in July and August. But there are essentially no wells, springs, reservoirs or any other natural source of water available to the people who live and work near the Grand Canyon. All their water is brought up in tanker trucks from Tucson, at a cost of 11¢ a gallon.

Ironically, it was water that created this one of the Seven Wonders of the Natural World. It took seven million years for the Colorado River to carve the 460 km. long, 1.7 km. deep Grand Canyon. Today’s visitors spend an average of only 15 minutes at the canyon itself. Fortunately, there are scores of other attractions nearby to help make a Grand Canyon vacation memorable.

I was enjoying Grand Canyon Outback Jeep Tours’ three hour “Deluxe Combo,” which included tours of the Kaibab National Forest and an ancient Indian cave. We stopped at a dry ravine and our guide, Jay McEvoy, described the dramas that unfolded 3,000 years ago. Anasazi natives, who lived in the Canyon, went there to hunt the giant Merriam’s elk. The hunters, teenage boys, would wait in the bushes upwind from the river where the elk came to drink. The animals stood over two meters tall and weighed 400 kilograms, but the young hunters would attack them with hand-made spears. They’d prepare the meat in a cave above the river, and then carry it back home, a walk that would take several days. 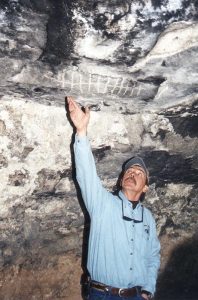 Jay led us on a short walk up to the cave, which was unknown to white people until a cowboy stumbled onto it in 1920. On the wall under a stone outcropping were pictures of elk, bighorn sheep and wolves, along with rows of puzzling geometric designs. A checkerboard pattern might represent a barrier fashioned from tree branches and used in elk hunting. A triangular shape could refer to a volcano that erupted 600 years ago near Flagstaff, 125 km. away. The red pigment used to create the paintings was found to have been made from a mixture of iron oxide and pine sap, but when scientists analyzed the elk pictures, they also discovered traces of both human and animal blood, possible evidence of a spiritual meaning to the rock art. Perhaps there were ceremonies to celebrate successful hunts that included spilling some of the blood of the hunter, mixing it with that of his prey, and then immortalizing their combined life force on the wall of the cave.

As the tour moved on, Jay pointed out a ledge where, a few weeks earlier, he had seen a bobcat with two kittens. The most exotic wildlife we saw were several groups of mule deer—mostly females—grazing among the pines and junipers, then bounding away into the forest. 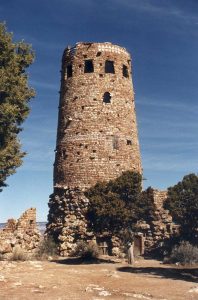 Anyone with an interest in Southwest Native art and architecture will enjoy visiting some of the nine buildings near the Grand Canyon that were designed and/or decorated by Mary Colter for the Fred Harvey Company between 1905 and 1937. In an era when most architects copied traditional European patterns, Colter became famous for designs that grew from the American landscape. Her first building at the Canyon, Hopi House, is a gift shop that was inspired by Hopi dwellings in Old Oraibi, Arizona, one of the oldest continuously occupied villages in the United States. Bright Angel Lodge is a hotel in the style of early pioneer log cabins. The interior of the Watchtower, an observation tower resembling the Mesa Verde cliff dwellings, is decorated with ornate paintings by a Hopi artist, recalling the Snake Dance and other ancient traditions and legends. 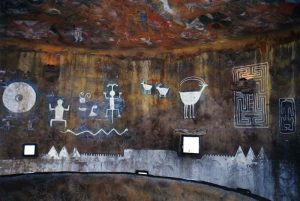 Before Colter started drawing the blueprints for her buildings, she dreamed up fictional histories for them. The La Posada hotel in Winslow, Arizona, considered to be her finest achievement, was based on the fantasy that it had been the estate of a wealthy Spanish aristocrat, built in 1779 with additions over the next 150 years. Actually, it was newly built in 1930. The rambling hacienda was filled with museum-quality antiques. Colter not only designed the building but also most of its contents. When she couldn’t locate enough of the furniture she wanted, she ordered a factory built across the street to create antique-looking reproductions. The architect even picked out the dishes for the dining room and the uniforms for the maids. Guests at the hotel have included Franklin D. Roosevelt, Howard Hughes, Clark Gable, Carole Lombard, Charles Lindbergh and many more notable personalities. Although it closed in 1957, La Posada is now in the process of being restored and is once again accommodating visitors to the Grand Canyon and other nearby attractions in north and central Arizona.

It’s about 250 km. from the Grand Canyon to the Petrified Forest, and the area in between is littered with fossils, ancient pottery fragments and chunks of petrified wood simply lying on the ground. Any visitor tempted to take home one of these illegal souvenirs should be aware of two things. First: state and federal laws prohibit stealing artifacts, with punishments up to $150,000 and five years in prison. Second: some thieves who don’t get caught by the law discover they have a higher authority to answer to. At the Grand Canyon Visitors Center I read a letter from a tourist named Sylvia who had mailed back some stolen fossils. She wrote: “It does cause bad karma to remove [artifacts] from the park.” She listed a string of five disasters that had befallen her after taking the fossils, then she requested, “…ask the Grand Canyon Poobah to take the curse off me now.” This was not an isolated incident. A Ranger at another state park showed me a letter from a man explaining why he was mailing back potsherds he’d stolen. “I’m sorry I was ignorant and stupid,” he wrote, detailing how he was “haunted” afterwards. Three times each night, his bedroom door would open and shut by itself. He desperately hoped that returning the artifacts would remove his curse.

It isn’t only thieving tourists who have had supernatural experiences with Native artifacts. A Grand Canyon Ranger told me about a nearby restaurant that once had a beautiful collection of ancient Navajo vases and jars on display, until one night a worker noticed that the entire shelving unit and all the pots in it were vibrating—on their own! The pottery, which had been collected from gravesites, was removed and returned to the Navajo Nation.

July and August are the rainiest months in the Canyon area. In May and September the temperatures are generally the most pleasant with fewer tourists. Five million visitors per year visit the Canyon, with four million of them coming in August. Because it is anticipated eleven million tourists will be coming to the Grand Canyon by 2010, plans are now underway to limit motor vehicle traffic. Within the next few years, private automobiles will be banned from the South Rim, and a light rail system and low-emission shuttle buses will convey tourists around the National Park.

Entrance Fee – A non-refundable $20 fee ($10 for pedestrians and bicycles) is payable at Park entrances and includes unlimited admissions for seven consecutive days to both South and North Rims.

Getting There – The most convenient major airport is in Phoenix, where it’s a 400 km. rental car drive through Flagstaff and Williams to the South Rim.

Dining – The most elegant dining is at the El Tovar Dining Room. The Arizona Steakhouse near the Bright Angel Lodge and the Canyon Star restaurant at the Grand Hotel are also recommended. There is casual dining in the Park at the Yavapai Cafeteria near the Visitor Center and the Maswik Lodge Cafeteria, and numerous fast-food outlets in Tusayan village.

The Arizona Office of Tourism is at https://tourism.az.gov.