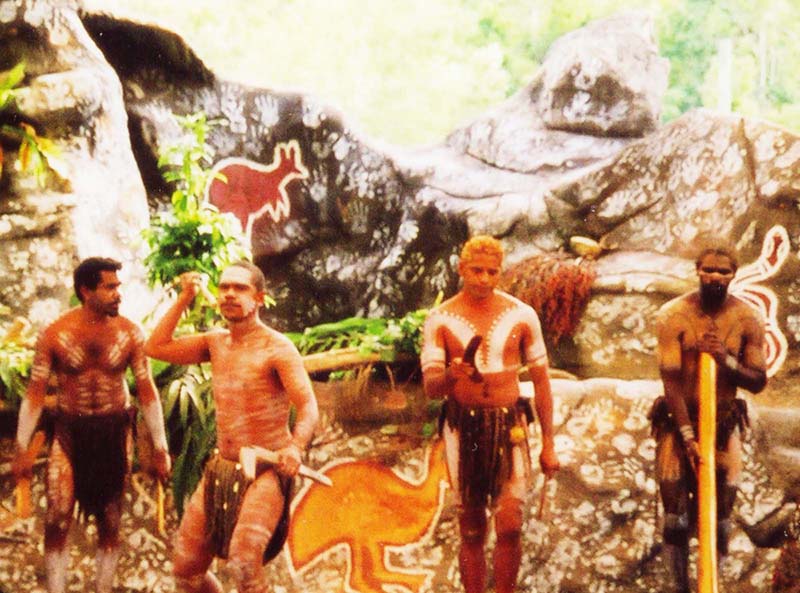 When the first European explorers came to Australia in 1788, they viewed the aboriginal residents as so uncivilized that British law declared the continent terra nullius, a land with no human habitation. Today the situation is nearly reversed. Environmentalists are fighting to undo the damage caused by non-native settlers, and botanists are struggling to unlock the secrets of medicinal plants that Aborigines have used for more than 40,000 years. I recently visited several places in Australia’s tropical north Queensland where traditional aboriginal knowledge and culture are being encouraged and shared.

Jowalbinna Bush Camp, northwest of Cairns, is best known for its ancient rock paintings depicting Ang-Gnarra rituals and mythology. But when I stayed at Jowalbinna I also learned about aboriginal bush medicine – natural pharmaceuticals that can be found in the outback. I was shown a kind of eucalyptus called the Ironwood tree, also known as the sterility tree, because native women could use it to induce miscarriages. There are two kinds of termite mounds, one that cures constipation and another that treats diarrhea. Our guide stabbed his hunting knife into a mound that looked like a three-foot high gothic sandcastle. When he drew out the blade, a handful of little white bugs were wriggling on it. He passed them around to taste. The termite grubs were woody and fishy, like grit from the bottom of an old boat, but the tiny amount I sampled didn’t have any effect on my digestion. 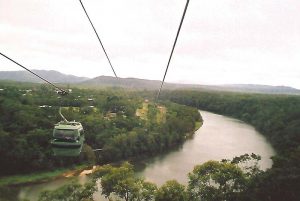 Only a few miles north of Cairns is the Skyrail Rainforest Cableway, carrying visitors above the treetops to the colorful markets of Kuranda village. On the way, I stopped off at Red Peak Station for a 20 minute guided tour with a ranger, who showed me more examples of aboriginal bush medicine. Kyo pointed out a plant with sap that can be used as an antibiotic, as can secretions from the weaver ant. Modern science still has much more to learn about the treasures rainforests may contain. Botanists recently analyzed the flora in one square kilometer near Kuranda and counted 1,500 different species of plants, seven of which had never been previously identified. 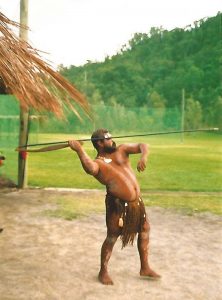 Joe Snider may not be a botanist, but he knows a lot about the rainforest that was home to his ancestors since the Dreamtime. Joe is a Tjapukai I met at the Aboriginal Cultural Park near Cairns in Caravonica Lake. Besides teaching about bush medicine, he sings and dances in the Dance Theatre and demonstrates spear and boomerang throwing. Joe’s language, Tjapukai, was nearly forgotten a dozen years ago, when it was spoken by only two community elders. It was revived with the help of seven young Tjapukai who wanted to perform a stage play in their own language. That script was a seed that has grown and blossomed into an award-winning attraction that draws tourists from around the world. Now, in daily performances, Joe and his tribesmen sing “Proud To Be Aborigine,” a song that proclaims, in both Tjapukai and English:

Two hundred years ago the white fella found,
A land he thought that no-one owned…
Black and white have got to unite,
Or there’ll be nothing left in the land down under.

One of the most unusual features at the Aboriginal Cultural park is the Creation Theatre, where I learned about Australian native spiritual and traditional beliefs from a production that combined live actors speaking Tjapukai (translated via headsets in eight languages) and giant high-tech holographic projections of swirling spirits from the Dreamtime, including the creation of the world by Rainbow Serpent. In a more conventional film at the History Theatre, I wept while watching scenes recalling the clash between Aborigines and the European invaders who pillaged, murdered and forbade native Australian children to speak the language of their ancestors.

Environmental experts estimate that Earth is losing two acres of rainforest every second. Not only are undiscovered or forgotten medicines being lost, but rainforests produce 40% of the oxygen we need to breathe. Tropical rainforests provide between 25% and 40% of all pharmaceutical products. Three thousand plants have anticancer properties, and 70% of them are found in the rainforests. Anyone who has internet access can help preserve our planet’s rainforests by simply clicking on two free websites. The Rainforest Site, http://www.therainforestsite.com is affiliated with The Nature Conservancy. Whenever someone visits, corporate sponsors make donations that help protect endangered rainforests. A similar website is http://www.saverainforest.net. There is no charge, other than having to look at a few advertising banners.

I visited Queensland, Australia in 1999 as part of a group press tour hosted by Tourism Queensland.