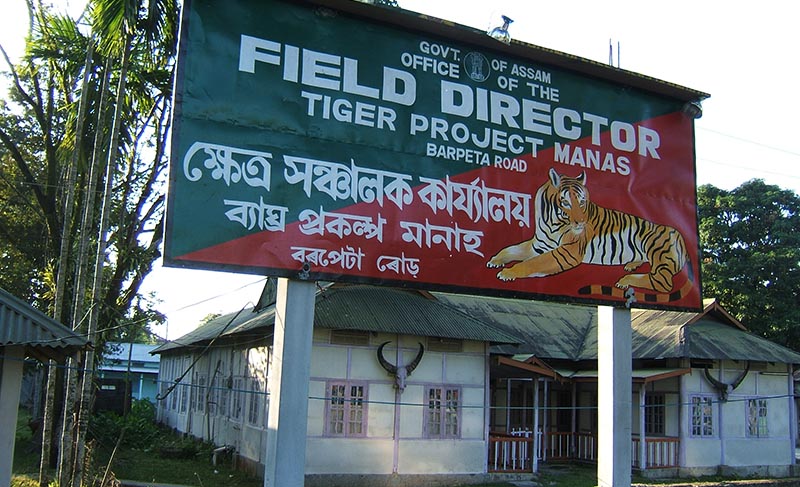 The man with the sickle was passing sheaves of long grass to the thatcher on the roof, but the dozen tourists on the nearby watchtower ignored this picturesque operation. Their eyes were trained on the freshwater pond and the adjacent patches of jungle that had been cleared to make the tigers easier to see. We were in Sudhanyakhali Mangrove Park in the maze of islands that make up the Sunderbans, site of one of India’s 27 tiger reserves.

One hundred years ago there were 40,000 tigers in India. Today an estimated 3,500 remain, with perhaps 100 residing in the Sunderbans. The number varies, as tigers in West Bengal regularly cross the border into Bangladesh (formerly East Bengal). The Sunderbans tiger census, taken in January, 2006, identified 65 different tigers by their pugmarks — footprints as unique as human fingerprints — in the muddy earth.

No big cats came into view from the watchtower, but we did see what Royal Bengal Tigers like best to eat: a group of six chital (spotted deer) emerged from the mangrove jungle just as we leaving. Unfortunately, deer, wild pigs, fish and crabs are not the only things tigers eat, so the locals must be constantly vigilant.

Mr. Tarun Mondal, one of the tiger census takers, told me how his group of twelve wore armor-plating on their necks and shoulders. “When Bengal Tigers attack,” he said, “they go for the throat.” Not only did Tarun’s group carry spears, a net and a rifle, they also wore masks on the backs of their heads, so any tiger behind them would believe it was being watched. 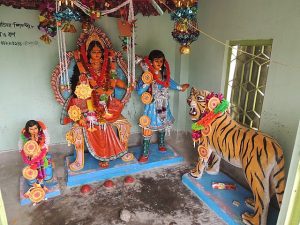 Near the dock I saw a shrine devoted to Bonobibi, the forest goddess to whom fishermen, wood-cutters and honey-gatherers pray for safety before venturing into tiger country.

Journeying to the Sunderbans was as fascinating as the destination, but it required a long, six-hour trip, by car and motorboat from Kolkata (Calcutta). As we putt-putted down the Hogol River, women on the banks were throwing nets, collecting shrimps and prawn seeds they would sell to commercial aquaculture farmers.

The longer the stay in the Sunderbans, the greater the chances of actually sighting a tiger. My day-trip from Kolkata was not long enough. Local guides recommend at least a two-night stay,

About 500 kilometers northeast of the Sunderbans, and mere steps from India’s border with Bhutan, is Manas National Park, another tiger reserve and UNESCO World Heritage Site. After tiger hunting by boat, my Manas experience, riding in a four-wheel-drive vehicle, accompanied by an armed guard, felt more like a real safari.

We parked near a bridge, where the driver waited behind as my guide, guard and I hiked along the river. The ground was alive with animal tracks — mostly deer and buffalo. The guard excitedly pointed to fresh leopard tracks, but I was after bigger game.

After several minutes of searching, we found tiger pugmarks. I laid a 100 Rupee bill alongside them for a size reference, and later estimated this tiger’s paw was nearly 15 centimeters (6-inches) long.

The trek was scenic but not very productive, until we returned to the car and the driver told us he had seen a tiger cross a mere few hundred meters in front of us. We had missed seeing him by a whisker!

Next morning we went hunting tigers on elephant back. Manas opens November 1st, but the tall grass that covers many of its 39,000 hectares would not be scythed and burned until early December, so the nearly 240 centimeter elevation of an elephant saddle provided an excellent, if slow-moving vantage point. 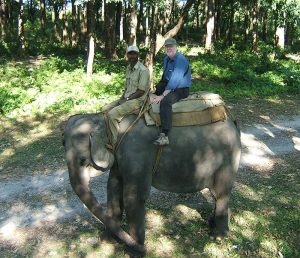 Unfortunately, tiger spotting was not one of the many thrills on our two-hour elephant ride. Perhaps it’s not possible to sneak up on a wily tiger while riding a thunder-footed 2500-kilogram pachyderm.

On our final hunt at Manas, we returned to the river where the driver had seen a tiger. We climbed to a bluff that provided a 180-degree vista of 500 meters of river — perfect for a hot tiger to get a cool drink and refreshing swim. We watched for more than an hour, but no tigers showed up We surmised they had probably gone to watch the elephant riders.

The Assistant Field Director estimates there are 56 tigers in Manas, but the official 2006 census numbers are not yet available.

Manas, in Assam, is 175 km north of Guwahati, and driving there requires a rugged four-wheel-drive vehicle, as the final 26-kilometers from Borpeda to Bansberi is a virtual minefield of potholes ranging from uncomfortable to hazardous, and there is a small stream to be forded. Facilities are minimal, restaurants are primitive and government run guest houses are sub-standard. This is a destination for the truly adventurous traveler who values an authentic experience over creature comforts.

Access to the Sunderbans is by motorboat from Basanti and Canning, which are connected by road and train services from Kolkata.

There are basic accommodations at a tourist lodge in the Sajnekhali Sanctuary, and more comfortable lodgings are nearby at the Sunderbans Tiger Camp.

Prior permission for foreign visitors to enter Sajnekhali Sanctuary and Project Tiger areas must be obtained from the West Bengal Forest Department in Kolkata. Telephone: 091-033-2221-5999.

Guwahati is accessible by air from KoIkata, New Delhi, Mumbai and Chennai.

This article was originally published in 2006.