“The Mysterious Paradise Island” said the sign above the airport terminal door. I had just landed on Kosrae, one of the four Federated States of Micronesia, and I would soon discover that this tiny island was brimming with mysteries. Of course, one of its biggest mysteries is that most people, aside from Micronesians, have never even heard of Kosrae. That exclusivity appealed to me. Located in a nearly empty part of the Pacific Ocean between Hawaii, the Philippines, Japan and New Guinea, Kosrae is about as far off the beaten path as you can get. Its nearest neighbour, the island of Pohnpei, is 485 kilometers (300 miles) away. The entire island occupies only 108 square kilometers (42 square miles). 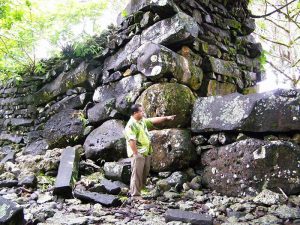 The manager of the Kosrae Visitors Bureau, Grant Ismael, who took me on a mini-tour, politely informed me I had been saying the island’s name wrong. It’s “ko-SHRY.” I asked Grant if he could show me around the Lelu Ruins. “Yes,” he smiled, “but it’s pronounced Layla, like the Eric Clapton song.”

Along with the statues of Easter Island, the ruins of Lelu are among the marvels of the Pacific. In ancient times it was a magnificent royal city with more than 100 buildings, paved streets and walls towering six meters (20 feet) high. The city was built using multi-ton basalt columns quarried on the far side of the island. Archaeologists estimate the construction took several hundred years and was finished about 1400 A.D. It was fascinating to see how the walls had been stacked using layers of prism-shaped stones, piled up like enormous logs. I asked Hamilson Phillip, owner of Kosrae Adventure Tours, how primitive people could have moved the heavy stones from so far away and arranged them so precisely. “Magic,” he said. “Super magic.”

Supernatural happenings at Lelu Ruins seem to have continued at least through the 20th century. Grant Ismael told me about a protective spirit called Ninamata Fatiti who is said to guard the ruins. She appears as a grandmother with age spots on her face, and she punishes people who are not respectful. The story is told of a man who made the mistake of picking a tangerine from a sacred tree. He was wrestled to the ground and had mud stuffed into his mouth. When he looked up he saw his attacker was an old woman.

Noriston Sipa, who works at Thurston’s General Store adjacent to the Lelu Ruins, told me how, when he was a child in the 1960s, he used to play around unexploded bombs, which were later taken away and safely detonated. Kosrae had been occupied by the Japanese during World War Two, and the area came under attack from American aircraft. Six bombs dropped in the ancient city failed to explode. Could Ninamata Fatiti have been protecting the graves of her ancestors? 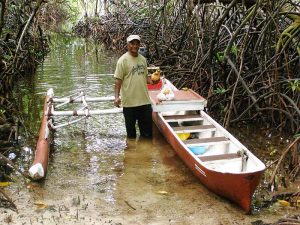 Tadao Waguk, known as Kosrae’s last great storyteller, took me in his outrigger canoe through mangrove channels to Utwa-Walung Marine Park. Besides describing how native plants are used for traditional medicine, Tadao told me about Kosrae’s other great mystery, pirate treasure. Bully Hayes had been the captain of the Lenora, the most notorious sailing ship in the 1870s. A thief, slave trader, rapist and cut-throat, Hayes supposedly buried three treasure chests on Kosrae before being killed and fed to the sharks by his own cook in 1877. A Japanese sawmill employee is believed to have dug up one of Hayes’ strongboxes prior to World War Two, but the other two have yet to be found. 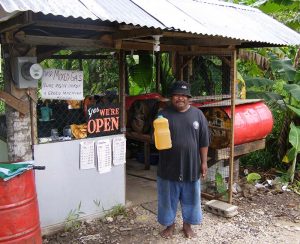 Kosrae is without a doubt one of the quirkiest places you could ever visit. When you first exit the airport you see a stall selling sushi filled with Spam. Even though Kosraeans drive on the right side of the road, the same as in North America, most of the vehicles have the steering wheels on the right, because they are sourced in Japan. I was even more surprised to see how they fill up with gas. They don’t. Petrol is dispensed from one-gallon bottles. The barefoot, smiling attendant carefully used a copper funnel to empty the bottle into our gas tank. At US$4.50 per gallon, you don’t want to spill a drop.

Kosrae receives only a few thousand tourists per year. Most Kosraeans are exceptionally friendly and speak reasonably good English. Scuba divers come to enjoy some of the clearest water and most pristine coral reefs left on the planet. I enjoyed snorkeling, jungle hikes, scenic waterfalls and a boat trip to a remote village that had neither road access nor electricity. It’s a fascinating destination, especially for someone who enjoys a good mystery.

The only air service to Kosrae from North America is the Continental Airlines island hopper from Honolulu with two stops at Majuro and Kwajalein in the Marshall Islands.

I stayed at Kosrae Village Resort, which offered unique accommodations in authentic, oceanfront, thatched bungalows with mosquito-netted beds, ceiling fans and open-air bathrooms. Its dining room served the island’s finest meals. When I checked in February, 2019 I discovered it was no longer in operation.

More conventional is the Nautilus Resort, with air conditioning, cable TVs, Kosrae’s only swimming pool and a pretty good restaurant.

Pacific Treelodge is a no-frills motel with a surprisingly scenic and inexpensive restaurant.

When I tried in 2019 to get more information from the Kosrae Visitors Bureau website, www.kosrae.com, I discovered it was not functioning.

I visited Kosrae in October, 2007 as a guest of the Kosrae Visitors Bureau. This article was originally published in 2008.