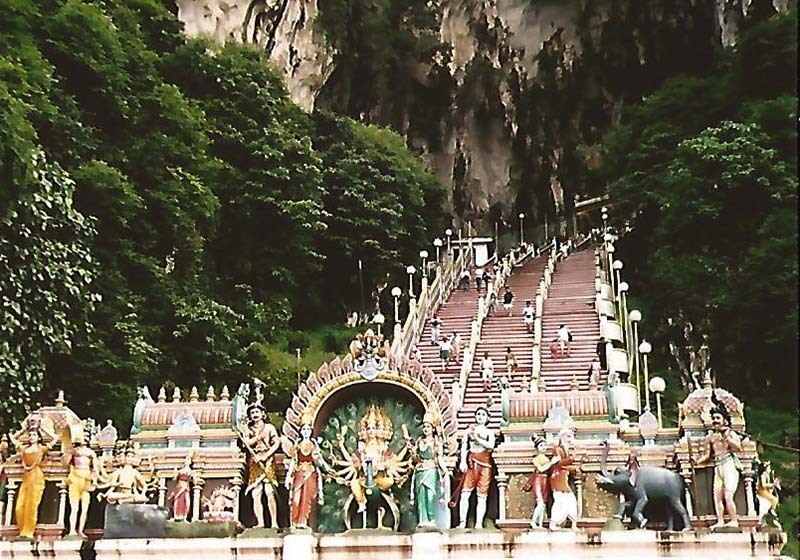 Some of the best advice I’ve ever been given about how to benefit from visiting sacred places came from Dr. Jean Shinoda Bolen. The author of Crossing to Avalon

and Goddesses in Everywoman

told me, “When you go to a sacred place with an open, receptive attitude, the energy of the place can activate the divinity within you.” She added, “Since you are going there to be affected by the place, you have to allow yourself to be affected.”

Dr. Bolen’s advice can be difficult to follow, especially if you’re in a foreign country, or an uncomfortable environment, as I learned during a recent visit to the sacred Batu Caves near Kuala Lumpur, Malaysia.

I live in the temperate Pacific Northwest, and I’d never before experienced the sultry atmosphere of Southeast Asia other than inside a sauna. Compounding the oppressive heat and humidity was the location of the caves — at the top of a flight of 272 steps. Fortunately, the staircase is very wide, so there was plenty of room for others to walk around me whenever I stopped to catch my breath.

Every year the Batu Caves are the scene of the spectacular Thaipusam festival, when worshippers demonstrate their devotion by skewering their flesh with large metal spikes and hooks, yet feel no pain. Thaipusam celebrates the birthday of the youngest son of the god Shiva, Lord Subramaniam, also known as Lord Muruga. Hindus prepare for the festival by cleansing themselves spiritually. For one month they pray frequently, eat only one vegetarian meal per day and abstain from sex. During the festival, some devotees cover their bodies in mud from the nearby river and crawl up the 272 steps to the temple in the cave. Others, entranced, walk on knives or broken glass. It is believed that celebrating Thaipusam will cleanse participants of their sins and redeem misdeeds from the previous year. An estimated 800,000 people — from faithful followers to curiosity seekers — were expected to attend the 2001 festival.

UPDATE: The next Thaipusam happens January 28, 2021 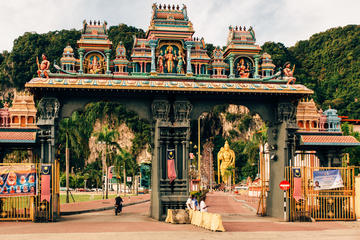 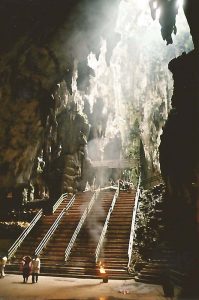 There are actually three caves in the Batu complex. The Dark Cave has some interesting rock formations, and the Museum Cave contains statues depicting scenes from Indian mythology. Several gray monkeys, long-tailed macaques, watched me walk toward the far end of the Museum Cave, where another stairway leads up to the Temple Cave. There was a fire of incense burning in a large brazier at the foot of the steps, and the smoke wafted up through patches of daylight into the third cave. When I finally made my way to the top of the steps, I could see the Sri Subramiar Temple, dwarfed by huge limestone stalactites that hung like gray curtains around the grotto.

I snapped some pictures of the temple and the clusters of Hindu gods on its top. There were puddles on the damp floor, and I worried about getting my socks wet as I took off my shoes before stepping into the temple. Behind me, a young man smashed a coconut onto the ground, and the noise of the explosion echoed sharply through the cave. (I learned later that breaking coconuts is a symbol of purification that helps you get rid of selfishness.) I looked around for the other members of my group and realized they had all gone back down. I felt uncomfortably disconnected, an intruder into a culture I could not understand or appreciate. Then the music started and everything changed.

I don’t know where it came from. Perhaps an unseen temple priest had simply pressed the button of a hidden cassette player. It was Indian music — drums, strings, woodwinds and cymbals. I couldn’t tell whether it was an ancient devotional melody or a contemporary pop tune, but the music touched my heart and opened it. Joy began to fill my being, and I allowed my body to sway and step with the rhythm. I looked up at the incense smoke swirling through the shafts of sunlight and smiled with a glimmer of understanding. I saw a young man, sitting and holding a white dove. Our eyes met, and I believe he sensed my enlightenment. Maybe I didn’t know who Lord Muruga was, but I was suddenly certain that his temple was a place of rapture and celebration.

My feet were as light as my heart as I retraced the 272 steps down from the Batu Caves. It was only then I recalled Jean Shinoda Bolen’s advice about being open to the spirit of places. I was chagrined that, if the music hadn’t started when it did, I might never have experienced the exhilaration that this sacred site could communicate — to someone who was willing to listen.

I visited Malaysia in the summer of 2000 on a press tour hosted by Tourism Malaysia. Our group also went to the island of Borneo, where we were the first journalists to tour the site on Pulau Tiga island where the first episode of Survivor was produced.