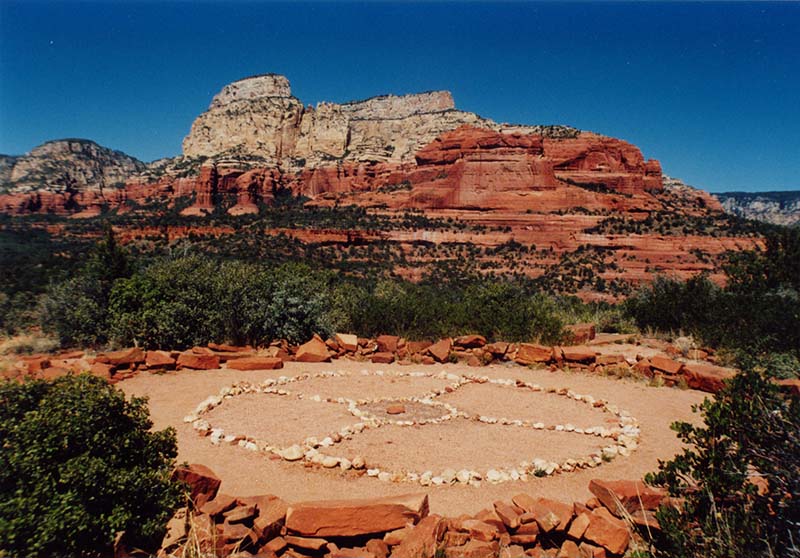 Why is Sedona such a powerhouse of transformational energy?

Drive north from Phoenix for two hours, up Interstate 17, and you’ll discover an area of awesome beauty and profound power. There are surprises at nearly every turn — a bend in the highway suddenly reveals majestic red stone castles on the horizon. The strong Arizona sun and crisp desert air are invigorating. Sedona even had the power to turn the plastic arches of America’s most notorious fast-food chain from yellow to green. It’s easy to be seduced by the wealth of Native jewelry shops, art galleries, New Age psychic and crystal retailers, but Sedona’s real magic comes from Mother Earth. So much has been written about the powerful vortices (or vortexes) that you may be tempted to discount such stories as too much hype, but it’s not hype. The vortex energy is genuine and tangible.

Since prehistoric times the Sedona-Oak Creek Canyon area has been sacred to aboriginal people. It is very likely that Hopi, Navajo and their ancestors came to meditate at the sites now known as the Sedona vortices. The term vortex was first used by trance medium Page Bryant, who identified Bell Rock, Cathedral Rock, Airport Mesa and Boynton Canyon as Sedona’s foremost energy centers. At least three other places of comparable power can also be found within the area: Oak Creek Canyon, Schnebly Hill and Rachel’s Knoll.

The three-night visit my wife Mary and I enjoyed was probably the minimum time recommended to appreciate the various energy vortices. Even with the help of several fine tour guides, we spent less time than we would have liked at most of the sites we visited, and there were a few we had to skip altogether. If you’re determined to “do” Sedona thoroughly, then plan to stay for at least five days.

Urban Sedona is divided into several areas, defined by their relation to the intersection of Highways 89A and 179, known as “The Y.” Uptown Sedona is northeast of the Y. Continue past Uptown on Hwy. 89A and you’ll reach Oak Creek Canyon and, eventually, Flagstaff. Northwest of the Y is West Sedona, the airport, and the road to Boynton Canyon, Rachel’s Knoll and Palatki. Below the Y, on Hwy. 179, is Bell Rock, the Village of Oak Creek and Cathedral Rock. 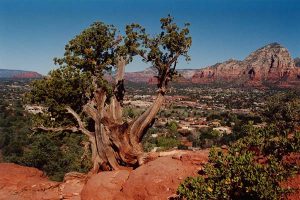 Airport Mesa is the most accessible and likely the least impressive vortex. It is located only about 1-1/2 miles from the Y, on Airport Road. From the parking area, it’s a very short walk up to the top of a small hill where there are several good spots to sit and meditate. It is said that you can identify areas of high energy by looking at the juniper trees. The more twisted the branches are, the closer you are to a power vortex. This seemed to be true at Airport Mesa. The actual vortex is defined as the “saddle between the hills, where the Juniper trees are very twisted.” Perhaps it was the masculine energy, but I didn’t want to sit and meditate there. I felt very active and energetic. Mary said she could feel “tingling waves” vibrating in the center of her body.

Almost all of Oak Creek Canyon is spectacularly beautiful, but West Fork Trail is probably the best part of Oak Creek. The only parking area near the trailhead doesn’t open until 9:00 a.m. The parking lot is one mile beyond Don Hoel’s Cabins, on the left side of the road. The trail is relatively easy to walk, but there are some places where you’ll have to wade the shallow waters of Oak Creek, so wear suitable footwear. The trail is less than two miles long, and on it many people experience feelings of peace and happiness.

At Cathedral Rock I felt nurtured and calmed by the gentle Mother Earth energy, which was very different from Rachel’s Knoll — a place so invigorating I was bouncing around like a jumping bean! Sedona was settled by ranchers, but it was artists who first began to understand the power of vortex energy. One of our tour guides told us it is impossible to live in Sedona and be unmotivated, but there is a danger of moving here without preparation. He said many sensitive people come to visit, fall in love with Sedona, move in, and then three or four months down the line have to leave because they are unable to withstand so much energy! Many older people who were never artistic in their lives suddenly bloom when they move here, starting painting, pottery or something else expressive.

Boynton Canyon can be initially off-putting because of the huge commercial development across the road. Our early morning hike was disturbed by the sound of many large trucks coming and going from the luxury resort. Risha Henrique, who visited the canyon recently, reported that it is a mysterious twilight zone or in-between place where Spirit is sometimes revealed. Others call it a “gateway to a vast unconscious realm.” Important to Apache and Taos people, the canyon is said to be the home of a mysterious presence. Some hikers have seen “the spirit of an old man with long white hair in a braid, having a kind but serious face,” Henrique wrote. He is a guardian who tells people, “Don’t desecrate this area.” In his book Return of the Serpents of Wisdom

, Mark Amaru Pinkham described a psychic vision he experienced in Boynton Canyon. He hiked to a ledge, where he sat and meditated, and then saw elaborate temples and a silver pyramid — echoes of when Sedona was a colony of the ancient land of Mu, or Lemuria. 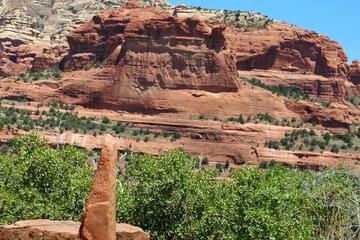 Why is Sedona such a powerhouse of transformational energy? In his book Star Temples in the Stones, Raymond Mardyks says that the rock formations in Sedona are all aligned with matching stars or constellations. Snoopy Rock and Twin Butte, for example, are aligned with Sirius, the dog star and Gemini, the twins. Mardyks believes Sedona is one of many sacred sites on the Earth that are “connected with the stars and other dimensions of time and space. When approached with the proper motivation and preparation, many of these sites offer the opportunity to experience very expanded levels of consciousness.”

A very different explanation is offered by Marty Wolf of Earth Wisdom tours. Sedona’s red sandstone rocks get their color from a high concentration of iron, a metal that stores magnetic energy. Sandstone itself is rich in quartz, the mineral from which computer chips are made. Added to this high concentration of geological energy, Marty says, is the fact that Sedona was settled by four aboriginal groups who came from the four sacred directions: Athabascans from the North, Apache from the East, the ancestors of the Hopi from the South, and Yavapai from the West.

Bernyce Barlow, author of Sacred Sites of the West

, says that underground rivers, geological cracks, fissures and fault lines, along with high amounts of iron and magnesium in the soil, give Sedona “a personality all its own.” The vortexes “interact with so many other kinds of earth energies that the vortex experience can become a mental barbell workout.” Barlow says “before the Spanish arrived…pilgrimages were made to Sedona from as far north as Canada and as far south as Central America. The tremendous energies of the canyons were renowned…No one lived in the canyons; that would be sacrilege. They were reserved as a holy place for spiritual growth and knowledge.”

For more information on sacred sites of California and Nevada go to: Shifting Sands

I visited Sedona in 1998, and this article was originally published that year. Some of my observations from that time may no longer be accurate.