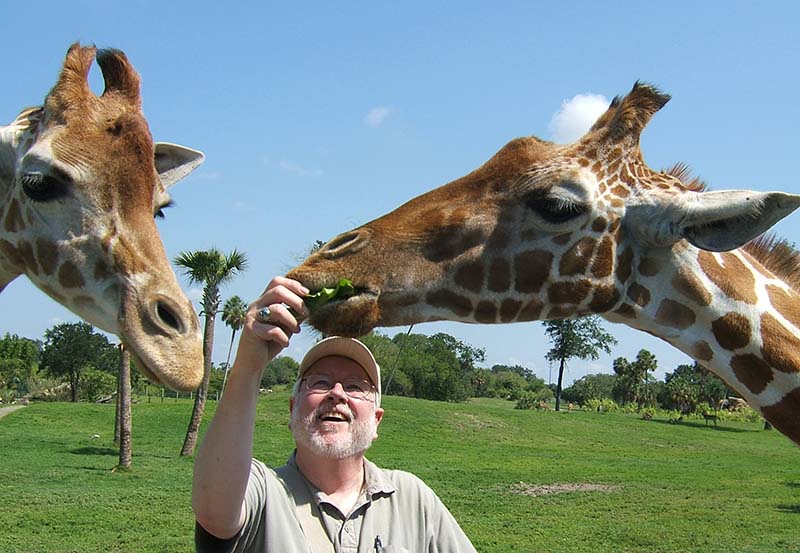 The giraffe’s enormous tongue gently plucked a green leaf from my outstretched hand. “Prehensile,” our guide called it. “And about 18-inches long, so it can wrap around branches and strip off leaves.” This giraffe, however, didn’t have to work so hard. She merely waited for truckloads of tourists to come feed her fresh lettuce. I patted her on the neck. It felt as solid as a redwood.

I was in a small group riding through the simulated Serengeti Plains at Busch Gardens Africa in Tampa Bay, Florida.

As we rode among the giraffes, elephants, zebras, rhinos and antelopes, I tried to imagine I was actually in Tanzania, but the roller coaster tracks, visible above the treetops, kept reminding me I was in an American theme park. 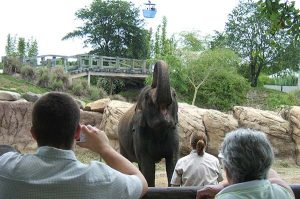 Hunting with a camera instead of a rifle, my goal was to “shoot” the famous Big Five African game animals: elephant, leopard, lion, rhinoceros and buffalo.

I discovered that Busch Gardens is a good place to see many, but not all of them. The park’s collection of rhinos is impressive, with five white and nine black ones.

Included in the admission price are unlimited rides on a miniature railway train, from which I saw ostriches, elands, wildebeests, impalas and gazelles, as well as water buffalo, but the 30-minute Serengeti Safari was an extra-cost option.

I figured it was worth US$33.99 to not only feed lettuce to a giraffe but also to give cantaloupe to an antelope.

A similar but less pricey giraffe experience can be found less than 8 kilometers away at the Lowry Park Zoo. 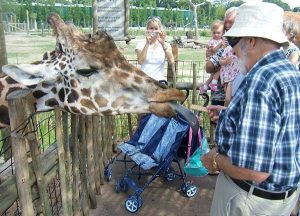 Their Safari Africa exhibit lets visitors feed giraffes with crackers purchased from a vending machine, and there were lots of children, parents and grandparents eager for the opportunity. “It’s a once in a lifetime experience,” a white-haired man enthused to me.

The zoo also lets visitors feed a rhino and an alligator, but only on weekends. Unluckily, I was there on a Thursday.

Still there was an impressive menagerie of animals to be seen, including species from Asia and Australia as well as Africa. I also met some interesting people.

I struck up a conversation with a woman who seemed fascinated by a family of sandhill cranes. One of North America’s largest birds, with a wingspan of about two meters, sandhills are on the list of endangered species.

“I used to eat them,” the woman said, “when I lived down by Lake Okeechobee.” She explained that her grandmother had cooked and served the birds about 50 years ago. I asked if they tasted like chicken. “Better!” she grinned.

I hadn’t seen any lions at Busch Gardens, and the ones at Lowry Park Zoo were napping in the early afternoon sun and didn’t look too photogenic, but I got close to some very impressive lions at Tampa’s Big Cat Rescue.

A non-profit, educational sanctuary, Big Cat Rescue is the home of more than 140 lions, tigers, leopards, cougars, bobcats and other large felines. Jeff, the young man who guided around the 45-acre site, told me some heartbreaking stories about the abused and abandoned cats being sheltered there.

Stretched out in the sunlight near the front of his cage was Sabre, a gorgeous 15-year-old black leopard. He had been “temporarily” left in 1995 by an owner who then moved and left no forwarding address.

Some animals had even more tragic histories. From a distance, Jeff pointed toward another leopard. “We shouldn’t go too close to Shaquille,” he said. “He hates men.” The former Las Vegas circus animal had refused to jump through a flaming hoop and was beaten nearly to death by a man.

Now mostly recovered, he purrs affectionately when female volunteers care for him.

I also saw Nikita, a lioness whose owner had her de-clawed and kept her chained in his basement. She had been seized by the DEA during a drug raid and has enjoyed living at Big Cat Rescue since 2001.

I later became less fond of Big Cat Rescue when I learned they feed live rabbits to some of their cats.

Being on safari in Tampa, Florida may not be as adventurous as really going to Africa, but it’s easier, safer and less costly.

For me, having recently passed the age-60 milestone, comfort and safety are travel priorities that have grown increasingly important.