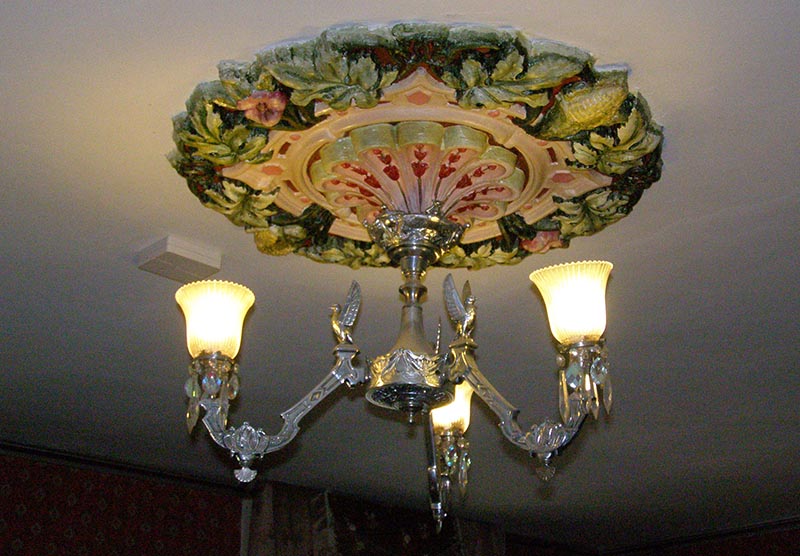 It was a disappointingly ordinary looking bedroom, considering its rich history. Some of the most famous men in the world had slept there. I was in Virginia City, Nevada at the Mackay Mansion, built in 1860 by George Hearst, father of newspaper baron William Randolph Hearst. 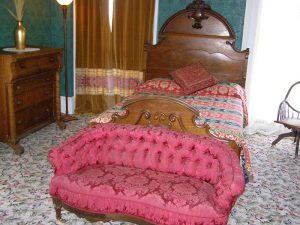 In the 1870s it was the home of Comstock mine owner John Mackay, who later founded AT&T. One of the wealthiest people on earth, Mackay earned over $100 million in his best year. In the front room I saw the vault where it was not uncommon for one million dollars worth of gold and silver ingots to be stored before shipping to San Francisco. 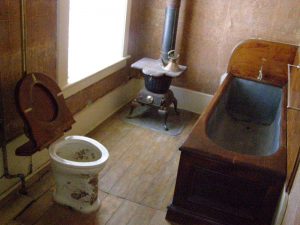 Down the hall from the bedroom, the first flush toilet installed west of the Mississippi can still be seen. At the time they called it an “indoor outhouse.” More opulent than the bedroom was the downstairs parlor, with a gold chandelier, an original Tiffany window, and a mirror made from crushed diamonds. President Ulysses S. Grant gave a speech from the second floor balcony in 1879.

“When Johnny Depp slept here he saw a ghost,” the tour guide told me. The actor had been in town in 1995 filming the movie “Dead Man,” and reportedly saw the spirit manifestation of a little girl dressed in white, one of four ghosts believed to reside in the house. 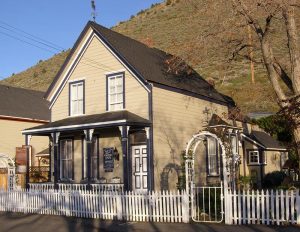 The B and B where I stayed, Edith Palmer’s Country Inn, was not without its Hollywood connection. Marilyn Monroe stayed there in 1960 while filming “The Misfits.” Her autographed picture hung in my room. As I breakfasted on waffles with fresh strawberries, innkeeper Leisa Findley told me the Victorian building dates back to 1863. She and her husband, Pat, bought it in 2000, and spent three years re-building and restoring it.

I had come to Virginia City hoping to connect with the old west. I soon learned it wasn’t a “Cowboys and Indians” place, but instead had been a center for miners and millionaires. During the gold and silver boom from about 1860 to 1880 it was the richest place in the world. The trains that exported gold and silver ingots imported the latest fashions and Champagne from Paris, as well as fresh oysters on ice from San Francisco and luxurious furniture from New York. 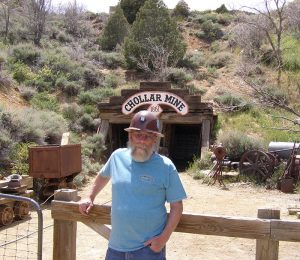 Miners, who earned 25-cents per day elsewhere, were paid four dollars a day here. But their working conditions were terrible. I toured the Chollar Mine and thankfully went only 400 feet into the dark, narrow, slippery shaft, trying not to bump my head on the low, wooden beams. “It got as hot as 130-degrees in some of the mines,” said our guide, Chris. “They could only dig for ten minutes before they had to go into a cold room.” When he switched off the lights, we were in very uncomfortable pitch darkness until he struck a match and lit a candle, the light source used by the miners. 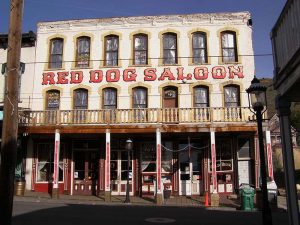 I celebrated my escape from the mine with a cold beer at the Red Dog Saloon. Now a pizza joint, the Red Dog is famous because its house band in 1966 was Big Brother and the Holding Company, featuring singer Janis Joplin. 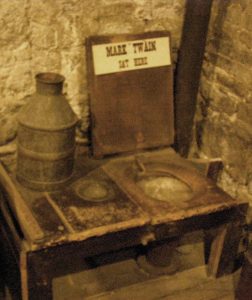 The famous names associated with Virginia City are countless. I explored Piper’s Opera House, where Jenny Lind, Maude Adams, Lily Langtree and Buffalo Bill had performed. A few blocks away I found the Territorial Enterprise Newspaper building. It was here in 1862 that a young reporter, Sam Clemens, was hired. He was calling himself Mark Twain two years later when he moved to San Francisco. The building, one of Virginia City’s oldest, has a Mark Twain museum in its basement. Alongside antique printing presses, I saw the desk where Clemens once wrote. In the corner was a wooden privy with a sign, “Mark Twain Sat Here.”

My stay in Virginia City proved all too short. I never got to ride in the authentic four-horsepower stagecoach or take the steam-driven railway train to Gold Hill. My only dilemma about when to come back is whether to return for the annual Rocky Mountain Oyster Festival in March or the International Camel Races in September.

I visited Virginia City, Ely and Elko Nevada in a June, 2010 press trip as a guest of the Nevada Commission on Tourism. This article was originally published in 2011.