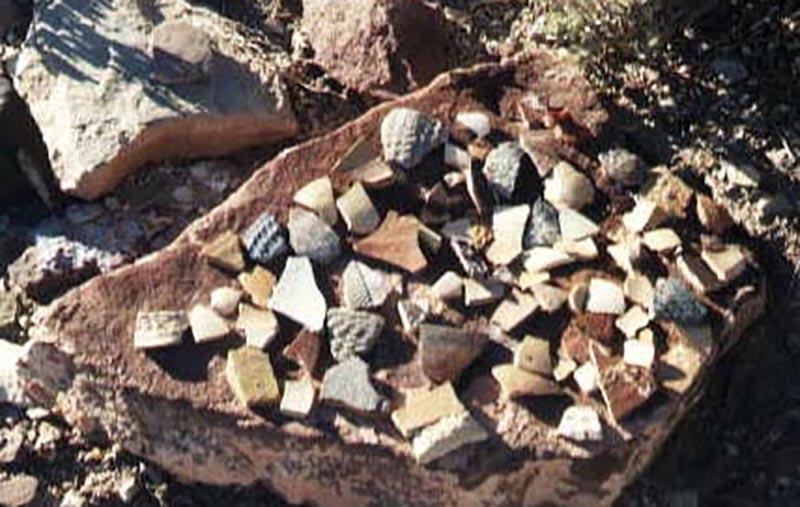 It’s an awesome feeling to spot a piece of broken pottery among the weeds, pick it up and realize it was made nearly 1,000 years ago. It’s even more awesome to realize how easy it would be to slip the matchbook-size potsherd in your pocket – and the powerful curse that could haunt you if you did!

I was in Homolovi Ruins State Park near Winslow, Arizona, trying to imagine what it was like before the ancient Hisat’sinom people (the ones archaeologists call Anasazi) moved up to the mesas, where we now know them as Hopi. The park opened in 1993, and it offers visitors the rare experience of touring an active archaeological dig. Scientists here, in consultation with the Hopi, are excavating ancient stone walls and studying broken pottery in order to understand the migration of Native Americans in the 1200s and 1300s. According to legend, the Creator instructed the First People to migrate across the continent until they found Maasaw, the Guardian Spirit of the Earth. They were directed to carve their clan symbols into the rocks wherever they went, and whenever they left a village to move to a new place, they were supposed to break their pottery. 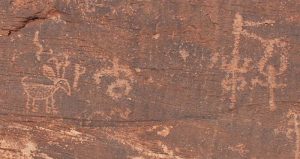 At the Homolovi Visitor Center I had a long talk with Park Ranger and manager Karen Berggren, and she told me where to find several petroglyph sites, hidden within the 4,000 acre park. Etched into the sandstone rocks are numerous clan symbols: bear paw, snake, lizard and humanoid forms, as well as geometric patterns. We also saw a row of three Kokopellis – the hump-backed flute player believed to be a fertility symbol.

“Homolovi is still a very sacred place to the Hopi people,” Karen said. “They often come here to pray.” She told us that if we saw any feathers tied to a bush, or lying on the ground, we should respect these prayer offerings and leave them alone. We didn’t see any pahos, but it wasn’t hard to find broken pottery. In one area, near the north end of the park, you can hardly walk without stepping on pre-Columbian potsherds. I picked up a beige, triangular ceramic fragment and rubbed it gently, wondering who had made it. The day before, in the First Mesa village of Sichomovi, I had met Ethel. She’s a small woman, about 70 years old, who makes clay bowls – completely by hand. There are no pottery wheels in Hopi country. Ethel said she even makes the pigments she uses to paint traditional black and red geometric patterns on her pots. Could the ancient potsherd I found have been made by one of Ethel’s ancestors?

I was momentarily tempted to keep the clay fragment, but I couldn’t help thinking about the amazing letter Karen had shown me, from a man who was mailing stolen potsherds back to the Visitor Center. He wrote, “I’m sorry I was ignorant and stupid … I should have known I was robbing the Hopi culture.” The man detailed how he was “haunted.” Three times each night, his bedroom door would open and shut by itself. He desperately hoped that returning the stolen artifacts would remove the “curse” that was causing him to feel so ashamed.

This was not an isolated case. Not only had Karen received several similar letters, but Rangers in two other parks said they regularly get rocks and pottery fragments mailed back by remorseful thieves with guilty consciences. Andy Pearce, a Ranger at Wupatki National Monument, gets two or three letters each year from people who were suffering from such “bad luck” that they had to mail back the artifacts they had pilfered. At the Grand Canyon Visitors Center, I read a letter from a woman who admitted that taking artifacts “does cause bad karma.” She confessed, “I’ve experienced bad managers at work … floods of epic proportion in my living room, many bad hair days … one lazy-bewildered boyfriend … [and] mental distress. A more detailed list should not be necessary. Just ask the Grand Canyon Poobah to take the curse off me now! No more plagues allowed. Sincerely, Sylvia.” 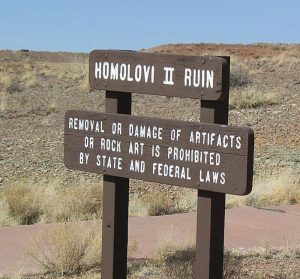 Arizona and U.S. laws call for fines of $250 to $150,000 and five years in prison for anyone caught stealing a piece of pottery or defacing rock art. But it may be easier to get past the human law officers than to avoid punishment from higher powers. Before the ancients moved away from villages such as Homolovi and Wupatki, they called upon the spirits of their dead ancestors to protect the sites. I didn’t want to risk offending any ghosts at Homolovi, so after admiring the little beige and black potsherd for a few minutes, I carefully set it back down on the ground.

I visited Homolovi State Park in 2000, on a road trip to Arizona that also included Sedona and the Grand Canyon. We stayed at the unique and historic La Posada hotel in nearby Winslow, AZ. This article was originally published in July, 2000. 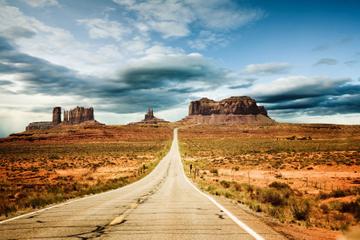