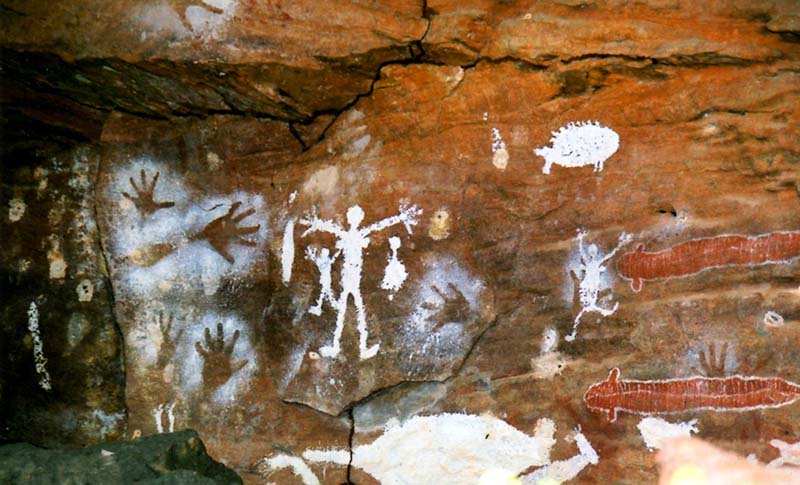 The oldest rock paintings on Earth are in the Cape York peninsula of Australia’s tropical north Queensland. They were made by Ang-Gnarra Aborigines as long as 35,000 years ago, and were unknown to whites until the 1950s. The galleries are now part of the Jowalbinna Bush Camp, and in 2000 I explored them on a tour organized by The Adventure Company of Cairns.

We had flown from Los Angeles to Brisbane on Qantas. Although flights to Australia from the USA are very long, the comfort of flying Business class made the experience quite comfortable. There was less comfort but more excitement in the long drive in a four by four from Cairns through Laura to Jowalbinna, where accommodation was provided in tent-like cabins. But the transportation and housing ceased to be an issue when we finally got to see the amazing rock art.

Most of the pictures were blood red, finger-painted with hematite (powdered iron ore). The pigment had permanently bonded to the sandstone, to remain visible for millennia. Our guide, Allan, was about 60 years old with a grizzled beard, and he climbed up and down the rocky trails like a mountain goat. “A few decades ago,” he said, “experts used to tell us that Aboriginals arrived here only 5,000 to 10,000 years ago. Now they’ve revised their estimates upward to 50,000 to 80,000 years. I wouldn’t be at all surprised if a decade or two from now they’re telling us it’s 250,000 to 500,000 years since Aboriginal tribes have been around.” An archaeologist from the University of New England led a scientific excavation of a site near Jowalbinna and concluded that it was first used for religious ceremonies 40,000 to 60,000 years ago, although a severe drought caused it to be abandoned about 32,000 years ago, and it wasn’t used again until about 12,500 years ago. 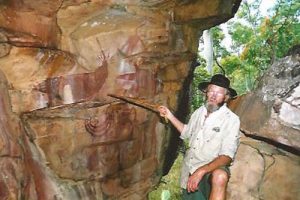 Many of the paintings were created while casting magic spells, or purri purri. Some were intended to make food more plentiful, such as more catfish in the river, or more yams in the forest. To understand some of the rock paintings requires a knowledge of secret Aboriginal traditions. One gallery seemed to have an especially mysterious aura. There was a rock wall with a deep undercut at the bottom that formed a shallow cave. Many silhouettes of small handprints stenciled near the entrance indicated that this had been a boy’s initiation place. Allan used his walking stick to point out the strange tableau of humanoid figures painted on the ceiling. We had to crouch very low to see them. “Look at this monster,” he said. “A boy would be brought to this place to learn about sexual taboos. Elders would tell him the legend about some poor fella who committed incest and was turned into a hideous creature!”

Some of the other figures included a circumcision scene, a voluptuous woman and a man with one of his front teeth knocked out. The coming of age of an Aboriginal boy involved an elaborate ceremony, during which he would be pushed through a dark, narrow opening. There, he was met by tribal Elders, including one dressed as a spirit, who circumcised him. Following the operation, he was not allowed to talk to anyone or touch anyone until his scar had healed. Afterwards, he would be taken away by one of the older women of the tribe, who would teach him about sexual intercourse.

In the next step of an Ang-Gnarra’s initiation, he would have one of his front teeth knocked out. This is because they believe in life after death, as most Australian Aborigines do. When someone dies and is buried, their spirit rises up three days later and flies to the entrance of Woolunda (Heaven.) The door is guarded by a spirit, whose real name is so sacred it must never be said out loud, so they refer to him as “Big Boss” or “Big Uncle.” When Big Uncle confronts you, he tells you a story that’s so funny you can’t keep from laughing. And, of course, as soon as you start to smile, Big Uncle sees whether or not you’ve had a front tooth knocked out. If you haven’t endured the tooth avulsion ceremony, then you can’t get into Woolunda. 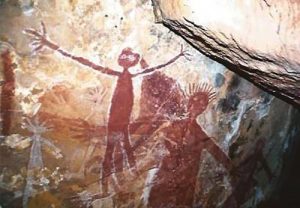 At another rock art gallery we saw a spirit believed to be Big Uncle. He was a very tall, thin figure, painted with a white outline, in-filled in red. His long arms and fingers were outstretched, and his eyes bulged white. There were several layers of figures painted one upon the other, so it was difficult to tell whether Big Uncle was supposed to have an enormous penis, or whether a garfish or crocodile painting had simply been superimposed between his legs. When Tommy George, the head Ranger for the Ang-Gnarra Aboriginal Corporation, saw the painting, he said: “He’s the big boss for all people — white man too!”

Besides hunting and initiation, other rock art had been painted for more personal reasons, such as love charms. If a love magic spell were done correctly, it could empower a man to get any woman he wanted, and she would not be able to resist. Allan told us it didn’t matter that some paintings were done on top of others. “The magic happens while the painting is being made” he said. Even more sinister were spells that could “sing someone to death.” Rock art that shows people inverted or lying on their side is evidence of black magic. 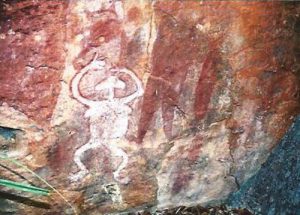 The Laura River area is the only place on Earth with rock pictures of Quinkans. Some Aborigines even refuse to pronounce their name, because Quinkans are such powerful supernatural spirits. They lurk in caves and other dark places and come out at night. The first Quinkan we saw didn’t look all that menacing. She was a Quinkan woman whose arms were raised above her head and her knees were bent, as if she was jumping up and down. “She’s an Imjim Quinkan, sometimes called Anurras,” Allan told us. “They’re short and fat, and bounce around at night like kangaroos.” According to Tommy George, “they can bounce half a mile in one hop.” Other varieties of Quinkans are tall, skinny Timaras, who protect children, and the nasty Turramulli, a no-necked giant.

The discovery of several multi-faceted quartz crystals at a nearby archaeological dig puzzled scientists until an Aborigine Elder explained that their purpose was for protection against Quinkans. The stones would have been placed around the campfire while the people were asleep. If any evil spirits tried to sneak up in the dark, the light from the fire would be reflected by the crystals. The flashing light would blind the Quinkans and drive them back into the night.

Many stories are told of visits to the Jowalbinna rock art galleries by Aborigines who were afraid to talk about Quinkans after dark, and who walked very quickly and nervously from the campfire to their tents.

Around our campfire, we told ghost stories and kept a watchful eye out for any Quinkans that might have been lurking in the tall grass beyond the ghost gum trees. There was an enormous full moon and a sky full of bright stars, so I didn’t really need the big flashlight Allan offered me, but I decided to take it back to my tent, anyway. Just in case!

If I ever return to Laura and Jowalbinna, you can be sure I’ll pack several good size quartz crystals in my luggage. After all, you can’t be too careful when you’re in Quinkan country. 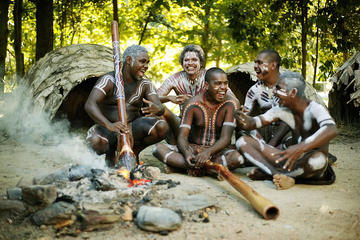 Find and book Cairns tours and activities on Viator.com.
Book ahead to save time and money!