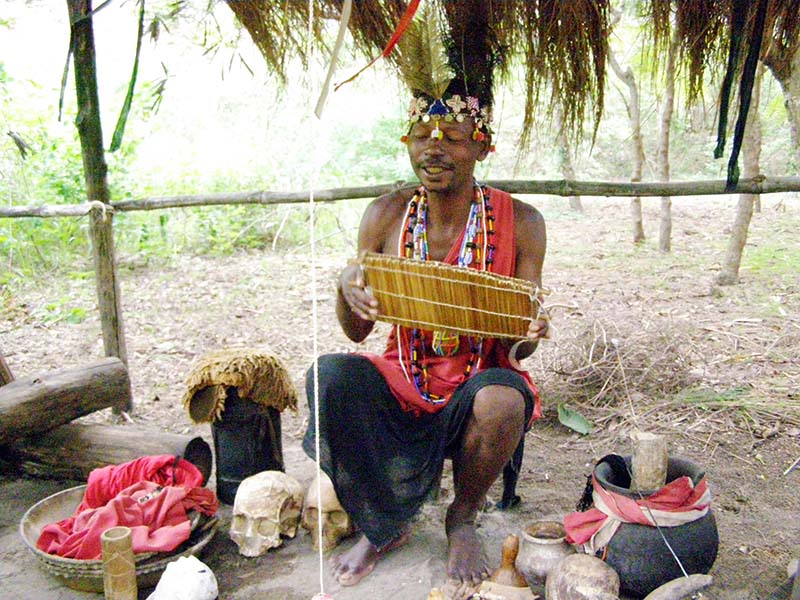 The witch doctor sat with human skulls at his feet. My guide said they were the bones of his father and grandfather who had also been witch doctors, and he receives messages from their spirits to help him diagnose his patients’ ailments.

I was on my first African safari, and meeting a medicine man had not been on my to-do list until an exhibit at the Nairobi National Museum caught my eye. It was a collection of amulets made by native healers to ward off evil spells. I instantly realized my knowledge of witch doctors — from Tarzan movies and a 1958 novelty song — was woefully shallow. I asked a museum guide if there really were witch doctors in Kenya.

“Oloiboni,” she told me. “That’s what the Masai call them. If you’re lucky, you may find one.” This was good news, as my itinerary included two encounters with Masai tribespeople. 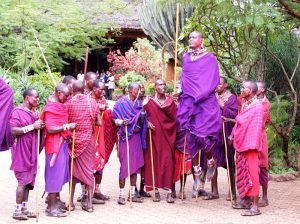 The first meeting took place in the foothills of Mount Kilimanjaro near Amboseli National Park. I was riding from Nairobi in a four-wheel-drive van with three other journalists, stopping on the way to marvel at herds of impalas, baboons, buffalo, elephants and two young, male lions. As we arrived at the Amboseli Sopa Lodge, we were greeted by two dozen Masai men and women, fully decked out in colourful tribal regalia. We grabbed our cameras and scrambled to photograph their singing, dancing and jumping. It was a spectacular ceremony of welcome.

Rooms at the lodge are designed like thatched Masai huts, and adjacent to the lobby is a craft market owned by the local Masai people. The proceeds help fund their community. As I shopped for souvenirs I chatted with Anna, one of the singers I had photographed earlier. No, she told me, there was no Oloiboni I could meet in her village. This was probably a good thing, because to get to her village would have meant a one-hour walk. 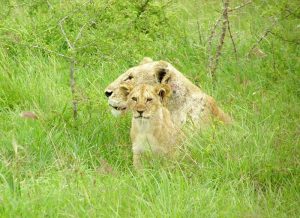 Our game drive proceeded to Tsavo West National Park, where Denys Finch-Hatton (played by Robert Redford in the movie “Out of Africa”) used to lead hunting expeditions. Near the Sarova Salt Lick Game Lodge we observed a lioness with two cubs in the tall grass. She was walking with a severe limp. Had she been injured while hunting? We were worried she may be too disabled to provide food for her youngsters. Our guide said somebody from one of the nearby lodges would probably look after them.

On the superb four-lane highway between Voi and Mombasa, our driver somehow managed to spot the unmarked turn-off to a Masai village that welcomes visitors. For a modest fee, we were shown inside huts built from cow dung, taught how to make fire with sticks, encouraged to join in their dancing and invited to purchase handicrafts. They seemed to have everything but an Oloiboni. 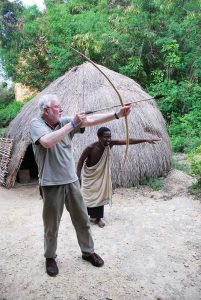 The witch doctor I finally met turned out not to be Masai but from the Mijikenda tribe, and I found him at the Ngomongo Villages near Mombasa. This eco-cultural park, built in a reclaimed limestone quarry, is a microcosm of rural Kenya. In nine different tribal homesteads, visitors can participate in traditional activities such as grinding grain, blacksmithing and playing musical instruments. After feeding an ostrich and shooting a bow and arrow, I finally got the audience I had been seeking. My guide referred to him as a jujuman, and he sat under a thatched canopy surrounded by the tools of his trade, a fascinating assortment of pots, horns, gourds and the skulls of his ancestors.

He shook his kayamba, a rectangular rattle, and he chanted a traditional song for contacting spirits. Unfortunately, they didn’t answer. He said spirits are hard to reach late in the afternoon. Early morning is best when they’re more awake. Although disappointed, I was determined to take home least a morsel of witch doctor wisdom. “Jujuman,” I asked, “do you have any advice you could give my readers in Canada?”

“Tell them to protect their forests,” he said, “for they are the source of natural healing.” He also gave me a small wooden amulet, saying it would keep me safe. So far, it seems to be working.

Ngomongo Villages open at 8:00 a.m., the time when spirits are most awake and available for contact by the park’s witch doctor. www.ngomongo.com

A highly recommended boutique hotel near Nairobi is the House of Waine, with 11 elegant rooms and impeccable service. www.houseofwaine.com

For more about travel to Kenya visit www.magicalkenya.com

Photo by Wes Lafortune: The author gets a bow hunting lesson at the Ngomongo Villages near Mombasa.