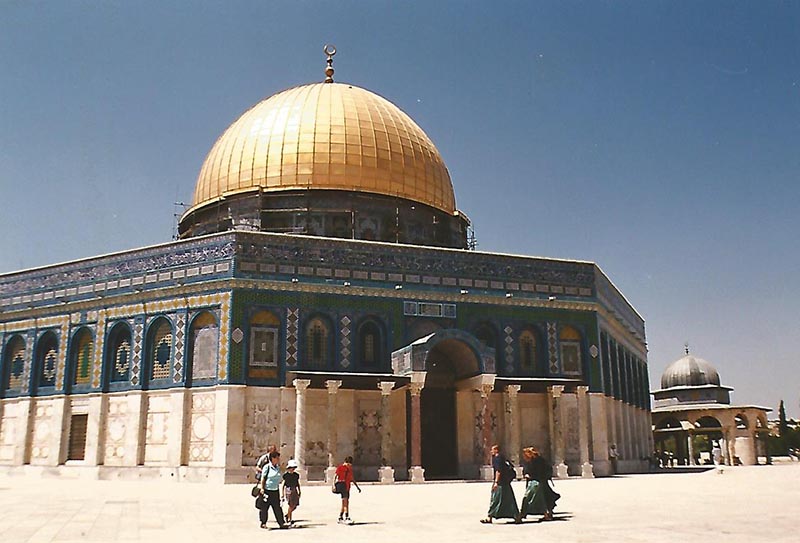 It is the holiest rock on Earth, and I touched it. Its surroundings have changed over the past 3.000 years, but the rock has been there since the beginning of time, and it is one of the focal points of many Holy Land tours.

One Jewish tradition is that the rock is the place where the world was created. A better known tradition is that when God tested Abraham’s faith by telling him to sacrifice his son, Isaac, the place He chose for the offering was a mountain in the land of Moriah. After the Angel told Abraham to sacrifice a ram instead of Isaac, Abraham called the place Jehovah Jireh, the Mount of the Lord. On the same spot in the 10th century bce Solomon built the First Temple, which held the Ark of the Covenant. The place became known as Temple Mount. 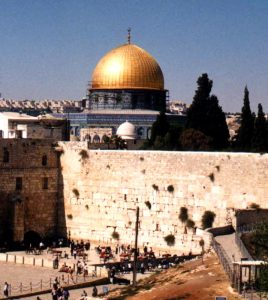 Solomon’s Temple was destroyed in 598 bce. King Herod built the Second Temple, expanding the site by surrounding it with retaining walls. The Second Temple and most of Jerusalem was destroyed by Titus in 70 ce, and the only part that now remains is the Western wall, which is called the Wailing Wall .

The octagonal building that now encloses the sacred rock is The Dome of the Rock, the third holiest shrine in Islam, built in the 7th century ce. It commemorates the great night journey of the Prophet Muhammad, who took off from Mecca, riding a winged creature given to him by the Angel Gabriel. They flew to Jerusalem’s Temple Mount, from which Muhammad ascended into heaven and met with Allah, before returning to Mecca again, via Jerusalem. On the rock, it is said you can see a hoof print left by Muhammad’s steed, al-Buraq. Hair from the Prophet’s beard is enshrined in a wooden cupboard within the Dome of the Rock.

When my tour group made its pilgrimage to the Dome of the Rock, we quickly learned that Jerusalem is as much Arab as it is Jewish. We entered the old city through a gate pocked by bullets from the 1967 Six Day War. Following “To The Wall” signs, we had to stop at an army check-point, where bags were inspected and everyone went through a metal detector. Just before the Wailing Wall (see photo above left) a pathway on the right leads through an arch in the wall, through an Arab check-point, and finally onto Temple Mount. 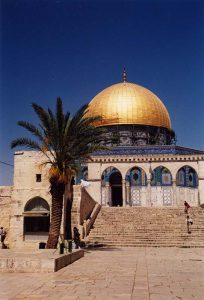 Sharing Temple Mount with the Dome of the Rock is The El-Aqsa mosque, built on the spot where Muhammad landed after his ride. During the Crusades, the Knights Templar used the mosque as their headquarters. It is theorized the Templars were excavating below the site of the Temples, perhaps searching for artifacts associated with the Holy Grail or the Ark of the Covenant.

You leave your shoes outside and walk in, surprised to find the stone floor covered by soft, richly patterned rugs. More foreign to my western eyes are the men on their knees in prayer along the aisles to either side. Islamic law forbids the use of images, so the ornate decoration consists of geometric patterns and quotations from holy scriptures.

We were soon out of the cool mosque and back into the sunny plaza, walking up steps and through a stone archway, drawing closer to the dazzling dome of gold and the holy rock beneath it. On the day of our visit, we were told the Dome of the Rock would be closing at 2:30 p.m. It was now already 2:15!

After leaving our shoes in pigeonholes opposite the entrance, we nodded to an Arab-looking man in an open-collared white shirt and black slacks, who guarded the doorway. We entered the holy shrine. The floor was covered in deep red rugs. There was a circle of columns, and inside them a wooden lattice surrounding the rock itself. As I walked around the lattice, I found steps leading down to a small cave underneath the rock. You can look up and see a hole in the rock. It is said that when sacrifices were made here, blood drained through the hole.

Upstairs I saw a group of five or six women, each of them covered from head to toe in white. They were lined up to touch the rock. One by one, they put their hands through a crescent-shaped hole in the wooden lattice. I waited for them all to finish. Then I reached in. The stone felt cool and its porous surface had been smoothed by the fingertips of millions of pilgrims for more than two millennia. When I drew my hand out again, one of the women gestured for me to smell my hand. It must have been the scent of heaven. Words cannot describe the holy perfume, the sacramental oil, the sacred incense I took with me after touching that mystical rock.

Too soon I heard the words in Arabic I knew meant “closing time.” On the way out, the man at the door asked where I was from. “Canada,” I whispered.

He asked, “What did you think?” I gushed, “Magnificent.” Tears began to well up in my eyes.

“Seventh century,” he said, proud of the holy shrine he guarded.

“It feels much older.” I was trying to explain that my main interest was in the sacred rock over which his shrine was built, but I could not speak any more. I sobbed out loud. The power of the place was utterly overwhelming.

It is a scientific fact that stones can absorb and store energy. When a stone has been the focal point of literally millions of pilgrims over thousands of years, the energy it might absorb is incalculable. When you compound that energy with whatever power attracted Abraham, Solomon and Muhammad to this holy site in the first place, it all adds up to a sum as infinite as heaven itself.

My heart feels as if it will burst with joy when I remember my pilgrimage to Jerusalem and the touch of my fingers upon the holiest rock on Earth.