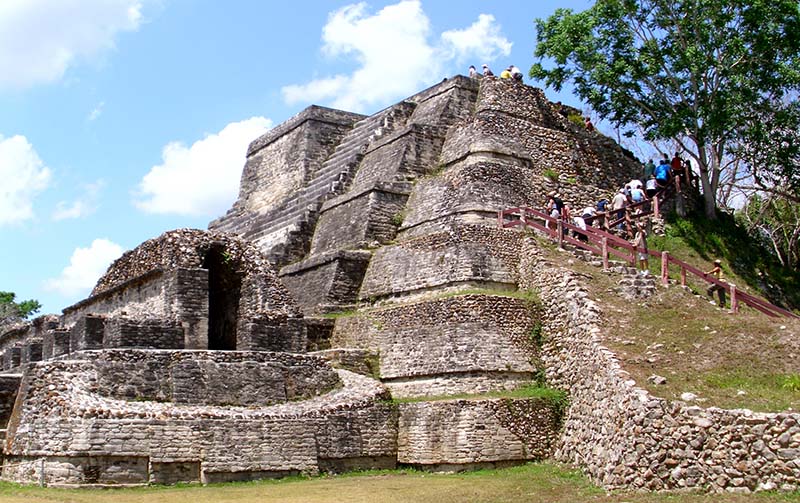 Belize is so rich in ancient Maya archaeological sites it has been suggested that the entire country should be listed as one. More than a dozen of the major sites have been at least partially excavated and have had some restoration work done. The one I visited, Altun Ha, is one of the most popular day trips from Belize City.

It is only about 35 miles out of town and the drive takes about an hour. Because it’s so close, it’s a popular attraction for cruise ship passengers. 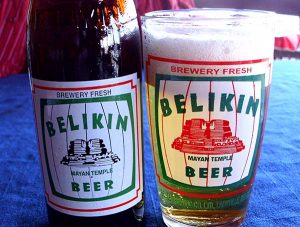 The largest of the Altun Ha pyramids is the Temple of the Masonry Altars. It is where, in 1968, archaeologists from Canada’s Royal Ontario Museum discovered a jade carving of the head of Kinich Ahau, the Maya sun god. The most important Maya artifact ever found in the country, a picture of it can be seen on Belizian paper currency. An illustration of the temple itself adorns the label of the most popular brand of beer in Belize, Belikin.

There was a long line of tourists clambering up a pathway to the top of the temple, so instead I chose to climb up another nearby pyramid, the Temple of the Green Tomb, and I have to admit that by the time I got all the way to the top, my knees were pretty shaky.

While we rested at the top, my guide told me the story of how he had once been bitten by a vampire bat – literally! It didn’t happen in Belize, but in nearby Guatemala. He had been staying in a guest house and woke up in the middle of the night to discover his face was wet – from his own blood! He told me that although the animals usually feed on the blood of livestock rather than humans, this one probably was unable to find any four legged creatures in the area. He went on to reassure me that the incident had happened about 20 years ago, and that today’s visitors did not need to worry about being bitten by vampires.

If you find yourself in Belize City thinking about making a day trip to Altun Ha, bear in mind that some 600,000 visitors arrive by cruise ship every year, and if you don’t want to have to fight the crowds, it’s better to go on a day when there is not a cruise ship at the dock. The admission fee for adults is US$10. 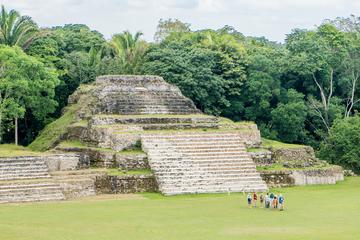 Update: I visited Belize in 2011 and the prices mentioned are probably out of date. More importantly, I stayed at a well known chain hotel in Belize City, went for an early morning walk, and was mugged. I was knocked down and my Nikon camera was stolen. My injuries were very minor. The government of Canada’s travel advice and advisories website now advises:  Exercise a high degree of caution in Belize, due to a high rate of violent crime throughout the country. I would advise not to stay in Belize City, but rather proceed directly to a safer destination. I had a wonderful time at the Chaa Creek Resort, and recommend it highly.

I visited Belize in May, 2011 as a guest of the Belize Tourism Board http://travelbelize.org.