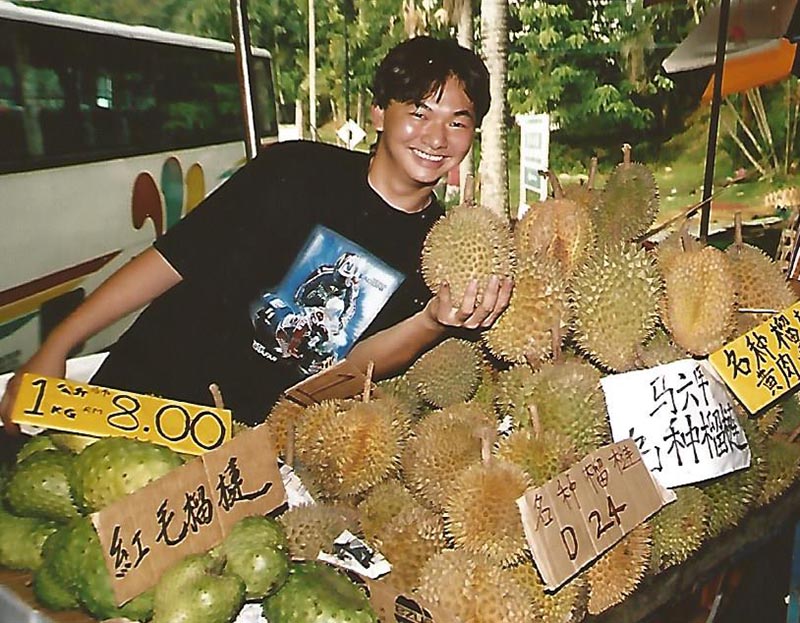 KUALA LUMPUR – “No Durians Allowed” has long been the rule in hotels, taxis, tour buses and airplanes throughout Southeast Asia, due to the fruit’s powerful, foul smell. But now the durian is sharing retail space with such designer labels as Tiffany, Hermés, Gucci, Faberge and Cartier. In July, 2000 the Durian Shoppe opened in the swanky Suria KLCC shopping center, at the base of the world’s tallest building, the Petronas Towers, in downtown Kuala Lumpur. 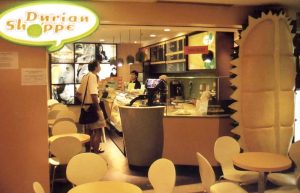 Calling itself “Malaysia’s first one stop durian haven,” the Durian Shoppe sells pancakes, crepes and cream puffs stuffed with pure durian meat, in addition to more unusual Malaysian delicacies. Apom berkuah is described on the menu as “sweet creamy durian sauce on top of a Peranakan pastry … which was brought back from near extinction.” An even more cryptic offering is durian pengat, explained as “durian meat cooked the traditional way in a variety of different ingredients and made into a creamy dessert.”

“Ninety-nine percent of people who try durian for the first time like it,” said Mr. Ishak Hassan, Durian Shoppe’s public relations manager, “but twenty percent don’t like the smell.” Mr. Hassan may have understated the aroma issue. Less charitable observers – or inhalers – have compared the act of eating a durian to bobbing for custard apples in a septic tank, or eating blancmange in an outhouse. One travel writer quipped that, when he visited a village in Thailand where the durians were ripe, he thought all their sewers had backed up.

The description of durians most frequently heard in Malaysia is that they “taste like heaven and smell like hell.” The Victorian naturalist Alfred Russel Wallace was more poetic. “To eat durians is a new sensation worth a voyage to the East to experience,” he said, describing the taste as “a rich butter-like custard highly flavored with almonds …but intermingled with it comes wafts of flavor that call to mind cream cheese, onion sauce, brown sherry and other incongruities.”

A sign on the Durian Shoppe wall informs customers that durians, in some communities, are believed to be an aphrodisiac. “When the durian season is in, the sarong is up!” the poster proclaims. Another commonly held belief is that durian heats the body and increases blood pressure or heartbeat. Drinking alcohol while eating durian is thought to be dangerous, or even fatal, a myth that motivated mystery writer Stuart Cloete to concoct a plot in which a Malaysian resident murders a visitor by feeding him large quantities of durian and whiskey. Mr. Hassan suggested that mango pudding, which the Durian Shoppe also sells, has a cooling effect that will neutralize the heat generated by durian. “Drinking water out of an empty durian shell will also cool you off,” he said.

Many Malaysians boast that their durians are better than those from neighboring Asian nations. “Durians from Thailand smell rotten,” a tour guide from Sarawak told this reporter, “and Chinese durians don’t smell at all.” Her favorite is the hybrid variety known as D24, and Mr. Hassan confirmed that D24 is what the Durian Shoppe prefers.

Durians look like a cross between a football and a hedgehog. They’re oval, greenish-brown, spiky, and weigh between one and four kg. although some have been known to reach 14 kg. There are two durian seasons in Malaysia, with harvests in spring and fall, and they were difficult to find in mid September, although I was able to track down one fruit stand in Melaka selling D24s for 12 Ringgit, CDN$4.75, per kilogram.. That works out to about ten dollars per durian, not including your ticket on Malaysia Airlines.

Despite the durian’s incompatibility with public transportation, the “King of Fruits” can sometimes be found in North America, particularly in west coast cities with large Asian communities. In San Francisco and Vancouver there are even specialty shops that make durian ice cream. And if the Durian Shoppe has its way, their durian pancakes and apom berkuah will eventually be available across Europe and North America. The company plans to open a location in Brunei next January, and negotiations are now in progress for franchises in Taiwan and Japan. Mr. Hassan says that if any international entrepreneurs want to open a Durian Shoppe in their country, his directors are willing to talk. Interested parties may telephone 03-5162-1255 in Kuala Lumpur.

I visited Malaysia in the summer of 2000 as a guest of Malaysia Tourism with a group of travel writers who were the first journalists to visit the location where the first season of “Survivor” was staged, Pulau Tiga Island on Borneo. 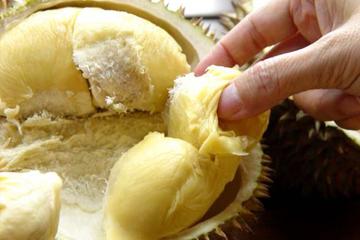 Full-Day Durian and Shopping Tour in Malaysia from Singapore