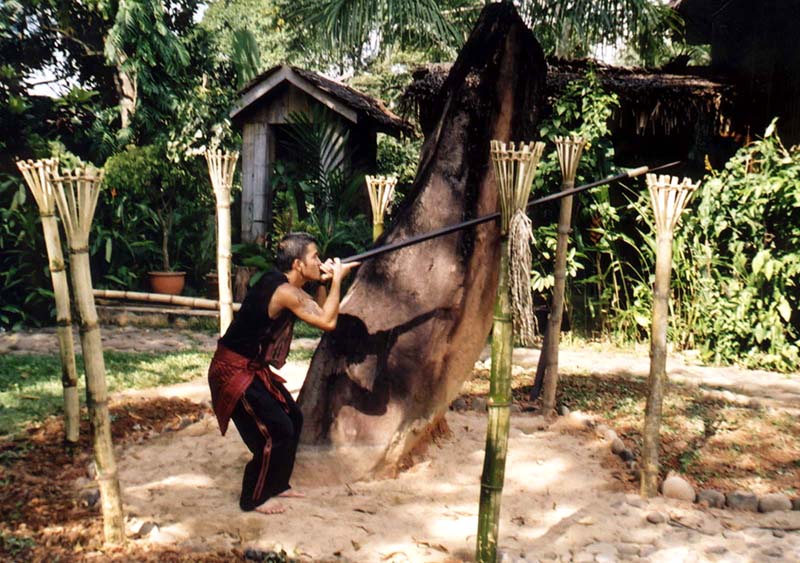 KOTA KINABALU, MALAYSIA – Nine generations after a Kadazan warrior named Monsopiad became a headhunter, the spirits of his decapitated enemies still protect the village of Kuai, a picturesque cluster of bamboo buildings on the Penampang River, on the island of Borneo.

In 1790, Kuai and the surrounding villages were plagued by pirates and other attackers who broke in and stole their precious rice and other supplies. Monsopiad, the grandson of the village headman, decided something must be done to stop these disastrous and shameful raids. He organized the village youths into powerful warriors, and Monsopiad earned a fearsome reputation as the best and bravest warrior of all. Ultimately, his grisly trophy collection numbered 42 human skulls. 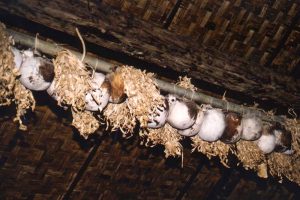 Today, visitors to the Monsopiad Heritage Cultural Village can view those 42 skulls hanging from the roofbeam of a reconstructed traditional longhouse, 30-minutes northwest of Kota Kinabalu, in Malaysia’s Sabah state. Bundles of curled palm leaves woven around the skulls give them a surprisingly festive appearance. The hisad leaves were carefully prepared by village priestesses. Known as Bobohizans, these highly respected women are mediums, believed to be in communication with the spirits. “One of the current high priestess is my great grandmother,” said Nicholas Dunngo, the 24-year-old guide who leads tour groups through the village. “They get the spirits to protect our rice fields and generally look after the place.”

One of the most important tasks of the Bobohizans is to perform a Feeding Ceremony, when, every three years, sacrifices are held at a stone monolith in the center of the village. Seven priestesses sacrifice seven animals over the course of the seven-day ceremony. Ideally, water buffaloes or pigs are sacrificed, but during difficult times seven chickens may be offered. At one time humans were sacrificed at the stone. They were young men from the tribe, warriors, who willingly gave their lives for the good of their community. 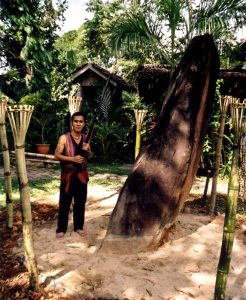 The monolith is a four meter tall, wedge-shaped granite stone weighing at least two tons. In honor of Monsopiad, the monolith was quarried on an island 16 km. offshore and transported, between two huge rafts, through the sea and up the river to where it has been standing for more than 200 years. It is encircled by seven tall bamboo poles called bangkaha. The tops of these poles have been split and spread open to form baskets. They are where the trophy heads of Monsopiad’s enemies were dried.

“The monolith stone is the witness,” Dunngo said. “Its name is Gintutun do Mohoing. Gintutun means spirit who lives inside and mohoing means ancestor.” He explained that the ground surrounding the monolith is the village graveyard. The bones of their ancestors lie buried below, and whenever sacrifices are made at the monolith, blood flows down to the ancestors. This is why the rite is called the Feeding Ceremony.

Under the thatched roof of the visitor center, Dunngo demonstrated how to shoot hunting darts with a long blowpipe. Later, he poured sweet rice wine into bamboo cups and offered a toast that sounded like “Ee-New-My.” He said it means “Drink for health, not drink for drink.” The wine is homemade, and Dunngo explained that there are many pantangs — taboos — associated with making it. For example, during the month the wine is fermenting the winemaker may not attend any funerals, because it is believed the spirit of the dead person could get into the wine. 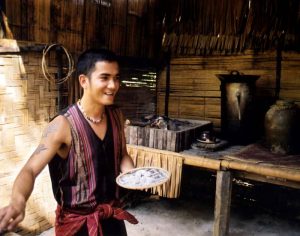 The Kadazan people celebrate an annual harvest festival at the end of May, thanking God for sacrificing his only daughter so that his people will have food to eat. Visitors who arrive at the Monsopiad Heritage Cultural Village during any traditional celebrations are welcome to join in and receive a blessing from the high priestesses, as long as local customs are respected. Shoes must be removed before entering any buildings, and it is forbidden to touch, or make disrespectful remarks or gestures to the Skulls, the Bobohizans’ regalia or the ceremonial sword carried by the Keeper of the Skulls.

As with many native tribes, the Kadazan culture and spiritual beliefs are in danger of being forgotten. Fifty years ago there were 40 high priestesses. Today, only seven Bobohizans carry on their traditions for the 500 remaining Kadazan people. Dunngo says his history must survive, and he is eager for more guests to come to his 1.2 hectare heritage village. He wants potential visitors to understand that his people stopped being headhunters long ago, “Although I can think of a few people whose heads I’d like to cut off,” he joked.

In January and February, visitors are welcome to help with the rice harvest using a traditional sickle. In late April, guests can take part in Magavau, a thanksgiving celebration in the House of Skulls, expressing gratitude to the spirit of the padi for a good rice crop. In July, visitors may participate in the annual planting. 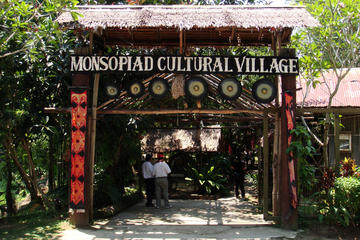 This was originally published in October, 2000

I visited the Monsopiad village in the summer of 2000 on a press trip organized by Malaysia Tourism. We also explored Pulau Tiga island, where the first episode of the reality TV series Survivor was staged.

On the same tour I learned about Durian fruit.